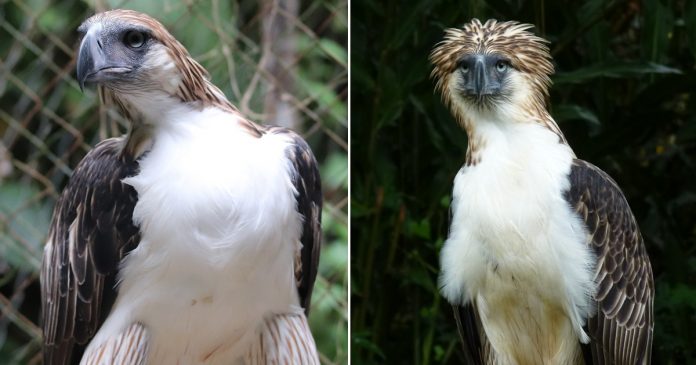 Philippine has 50 long years of good ties with Singapore. To commemorate the friendship and in an effort to conserve and breed the endangered animal, the ambassadors of both countries have signed a Wildlife Loan Agreement.

As per the loan, a pair of extremely rare Philippines eagle has been loaned to Singapore’s Jurong Bird Park (JBP) by The Philippines’ Department of Environment and Natural Resources (DENR).

Geothermica, 15, and Sambisig, 17, will be brought to Singapore’s Jurong Bird Park to increase their population.

When asked about the importance of the bird to the nation, DENR’s secretary Roy Cimatu had a few words to say.

“The Philippine eagle is the crown jewel of Philippine biodiversity and an integral part of our rich heritage. As our national bird, it embodies our aspiration to soar high as a nation.”

He also mentioned that they’re an ideal ambassador of Philippines biodiversity and is the best shot they have to create awareness for conservation.

Giving the pair a new home is also a hopeful effort to initiate breeding. DENR is looking forward to seeing the birds multiply, considering the new environment will accommodate the process.

“Primary objective is to secure the population of the species elsewhere. This is primarily to protect the Philippine eagle from threats of outbreak of diseases or calamities,” said Dennis Salvador, executive director of the Philippine Eagle Foundation told ABS-CBN.

Jurong Bird Park will see the arrival of the birds sometime in June.

Today marks a huge milestone in our conservation efforts! A Wildlife Loan Agreement was inked today between Jurong Bird…

Posted by Wildlife Reserves Singapore on Sunday, May 19, 2019

The Philippines eagles are also known as the monkey-eating eagles for the longest time, an observation reportedly attained from the indigenous people. Later on, some studies were conducted and it was revealed that their preys included snakes, monitor lizards and even hornbills.

The majestic birds can be told apart from the rest of their family due to their distinctive features. They have a white-brown mixture plumage and a shaggy crest.

This is how the adorable version of mini-sized NBA looks like...