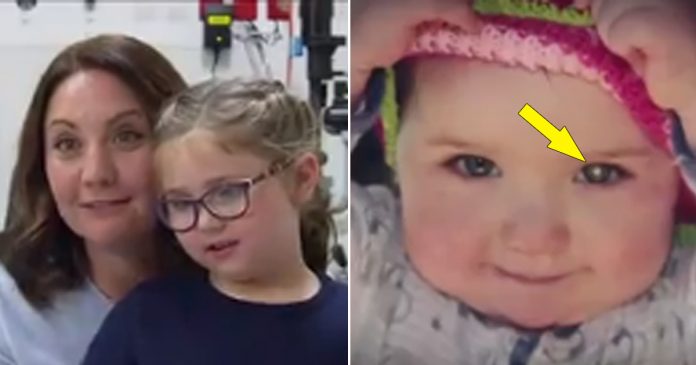 A mother’s instinct worked well in her favor when she identified her daughter’s cancer after recurrently seeing a ‘ghostly’ white glow in the young girl’s eyes.

Queensland native Kellie Perren kept noticing an unusual illuminating glow in her daughter Isabel’s left pupil. It only came into visibility when the five-year-old was photographed with a flash or was exposed to light.

She grew worried because it was becoming more and more obvious. A visit to the hospital confirmed her concern – her daughter was diagnosed with retinoblastoma, a rare eye cancer.

It turned out that Isabelle had multiple tumors in both eyes but it was her left eye that suffered critical damage. Eventually, the small girl’s eye had to be removed and replaced with a prosthetic.

Kellie was called on a breakfast show to spread awareness on early detection of cancer.

“I couldn’t explain it – I kept asking people if they could see it but no one could see it. It was like a ghost went really quick, like you couldn’t get a good look at it,” she said when asked about the symptoms that lead to her suspicions.

Kellie is proud of her daughter that despite what she has gone through, she is still able to read, write and learn. Isabel, when asked how she feels about her condition, says ” It’s alright to have one (the cancer).”

A Queensland mum is urging parents to look out for symptoms of a childhood cancer after spotting it in her baby’s eye.https://t.co/ecBjodk4Kx

Retinoblastoma usually affects kids under the age of five, but can be hard to detect. The best way to go about it is to routinely check your kids’ photographs. It’s a rare condition, but it has a 90% cure rate if detected early.

The two main causes of this type of cancer is genetic mutation inherited from parents or the development of the mutation in the womb of the mother. A clear red flag is when your child squints often, which if left unnoticed can turn deadly.

“I thought it was a dog” defends singer who kept an...