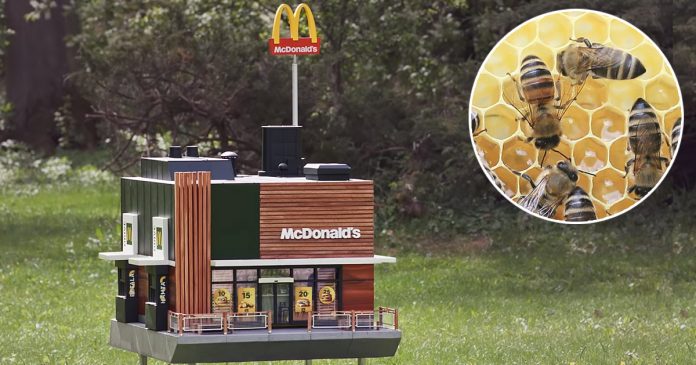 The bees are at the top tier of the world ecosystem. They are responsible for maintaining the balance between humans and nature but due to climate change, they have been listed endangered.

As a token of gratitude for the continuous effort undertaken by the Swedish franchises of McDonald’s, the fast-food giant has collaborated with a design creative agency to create ‘the world’s smallest restaurant’ in an attempt to save the bees.

Essentially a fully-functioning beehive, the tiny establishment is entirely handcrafted out of wood.

It displays the full works including the drive-thru, al fresco dining area and advertisement posters on the window, not forgetting the iconic golden arches.

In a video released by NORD DDB, McDonald’s has expressed its intention to attract ‘thousands of important guests’ everyday. The video has since gone viral on 9gag and has resulted in netizens coming up with some great puns.

“I guess you could say.. The bees are gonna get dia-bee-tes,” snides another user.

“Should have been Beeg Mac. A kind of the opposite of how small it is.”

A good number of the comments also poked at another fast food chain that has the word bee in it: Jollibee.

“So in response, Jollibee’s gonna make a branch exclusively for clowns?” Ouch, easy there. I don’t think clowns are endangered, are they?

Most McDonald’s in Sweden has allocated a conducive environment in their rooftops for the bees to build their hives.

Taking inspiration from them, franchises from other parts of the world have joined the initiative by planting flowers around their restaurants’ vicinity.

What do you think about it? Watch the video for details and let us know.