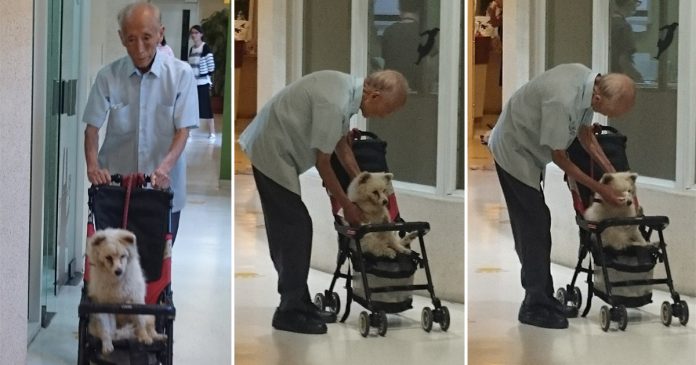 What makes someone or something likable? It can be their adorable face, bubbly personality, cheerful nature or anything at all that appeals to others. Unfortunately, all these traits we find admirable fades over time, as we grow older.

Humans and pets alike, we both face the same fate. As we get consumed by age, our movements are restricted, we contract illnesses and we become physically weak. During times like these, we need someone to take care of us but how many are willing to genuinely care?

A touching picture shared by a netizen on Facebook shows an old man pushing a dog in a stroller on their hospital visit.

The grandfather, despite being old himself, cared for the furry companion enough knowing that he is weak and can’t walk on his own.

The photo was accompanied by a caption that roughly translates as below:

“When I was taking my dog to the hospital, I saw a grandfather pushing an old dog step by step in a stroller. This is what true love looks like. He will not leave it side until the very end.”

The netizen also made a few observations of the touching incident.

The grandpa was seen to bend over from time to time to check if the old dog was doing alright in the stroller.

He even gently wiped off the dirt from the corner of his eyes and adjusted his position in the stroller to make sure he is comfortable.

His every move can be seen full of care and love and it was so unconditional. The comments under the post read how touched netizens were looking at such an act of love. Here are a few.

“This is the concept of living life to the whole.”

Lucky are those who are loved, and the dog is one lucky being.

Here is a sure fire hack to get your desired amount...