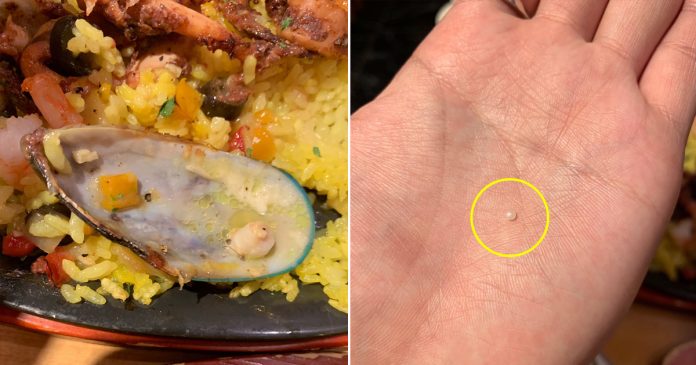 Often times, your hectic lifestyle doesn’t allow you to have enough time to do basic things like cooking and so having dinner out once in a while seems alright. You get to enjoy good food while being in a stress-free environment.

Recently, a young Japanese couple decided to go on a night out for dinner. Perhaps, they were on a tight budget, so they chose this value-for-money Italian restaurant to enjoy their meal.

The evening was going really well for them until it turned out better.

The woman, while having her food, found a tiny pearl on her dinner plate. Yes, an actual pearl! Apparently, the woman ordered a seafood paella which contained green mussels in it. As she was forking the meat out of one of the shells, she noticed a small round bead-like object.

Upon closer observation, both of them confirmed that it was indeed what they thought it was. She posted the picture on Twitter and it surely caught the attention of netizens online. It was said that the probability of finding a pearl on your plate is about one in a million chance.

Many of them just ‘awww’-ed at the cuteness of the sesame-sized gem, saying that it is an extremely adorable sight.

“I have never seen such a small pearl,” said a person.

Some consider the couple to have encountered good luck by chancing upon the pearl because the kind of pearl is rare to be found in the sea, more so in your food!

“You both are going to experience something good real soon!” read another comment.

A few of them even went on to pick on the boyfriend’s future intentions.

“Maybe your boyfriend is secretly planning for a surprise proposal. Watch out for the hint.”

Maybe it was sheer coincidence. Maybe it was pure luck. Regardless of which, we are sure the couple had a memorable evening with a sweet experience they will not forget.