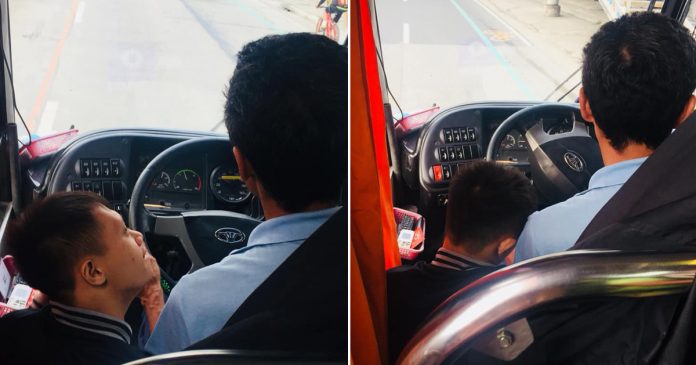 Fathers are oftentimes dismissed from being shown to have a great relationship with their children. This is due to a general assumption that men generally have a hard time showing emotions, even with their family.

Based on this Facebook post shared by Marivic Ando Natividad, though, a father-son’s unconditional love was beautifully portrayed.

She was going to work one morning when she decided to skip her usual route and take the bus.

Little did she know that she was about to witness a touching scene between the bus driver father and his special needs son. She explained how she felt lucky seated next to the boy. Based on her description, he was a happy, bubbly child who was smiling at her all the time.

She highlighted how he knew all the bus stops by heart and ‘alerted’ his father whenever a passenger departed the bus. She noticed that the bus driver was seemingly happy with the boy’s antics and was entertaining him. It left her wondering why the boy left his seat to go sit next to the bus driver.

Then she heard the boy calling out to the driver, “Papa! Papa!” and realized that they were father and son. She was touched. Marivic continued watching the two go about their day, they even sang a song together!

She was engulfed with admiration when the father patiently listened to every single word his son was speaking to him, not thinking it might be a distraction for him to focus on the road.

The beautiful scene moved the lady passenger deeply that towards the end of her post, Marivic thanked all the fathers out there for their selfless sacrifices to provide for their children.

She also took the opportunity to tag her own father, expressing her gratitude to him.

A father's love ❤️This morning I decided to ride a bus going to my work not my usual route actually. Then luckily I…

At 70, this grandma decided to work at McDonald’s—she was the...