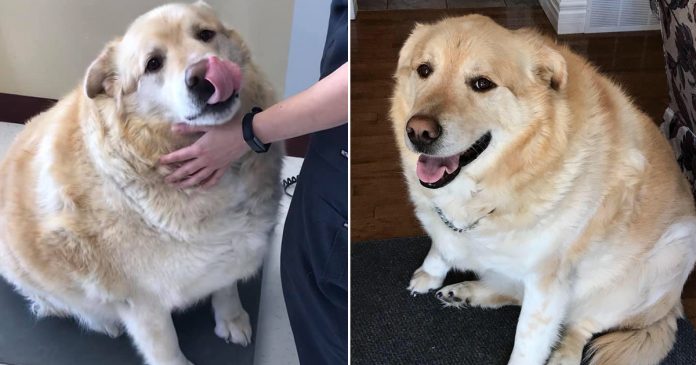 This is the story of Kai. He was an overweight Golden Retriever whose owners were at the verge of giving up on him. He weighed a whopping 173 pounds and could not move at all.

The owners had decided that putting Kai to sleep is the only option. They brought him to the vet to have him euthanized. Fortunate enough for the dog, the vets decided to help him get back on track.

That’s when Pam came into the picture.

She agreed to be his foster mother and take on the challenge. Kai had to lose about 100 pounds to ensure he is healthy. However, Pam was clueless as to where to begin. It was already starting to look like a dead-end to her.

When Pam first brought him to her house, Kai struggled getting up the stairs. It took him a whole 20 minutes to just get up 3 steps.

Pam then realized the real challenge was on her, not Kai.

She did not give up and bring him for walks, only for him to tire himself out after the first few steps. He’d end up lying on the ground. Trips to the park didn’t favor much too. He would just sit and watch other dogs play because there was no way he could run and catch up to them.

Pam decided it was time to intensify the challenge. Kai was put on a strict diet, and had to walk 3 times a day. She also made him swim regularly to increase his physical movement. He showed tremendous improvement, moved better and was even able to lick his hind legs, which was an impossible task for him before.

Not only did he lose weight, but he also has a loving new family as Pam has adopted him.

Kai is an inspiration to everyone who is struggling for a change.

A 2-Week-Old Puppy was Abducted by a Wild Monkey; The Little...