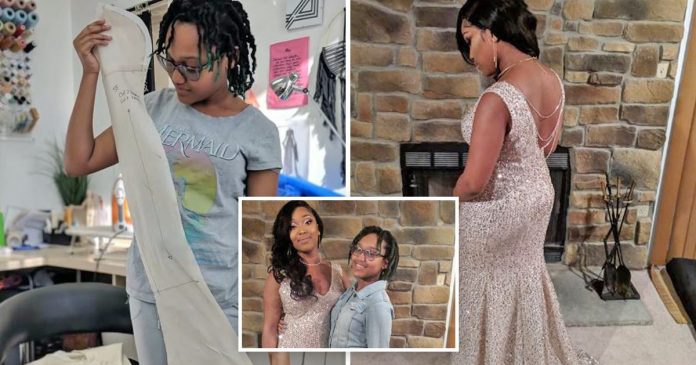 Prom is an important part of the high school culture in America. It symbolizes and celebrates the coming-of-age of teens and prepares them for adolescence. There are a lot of things about prom that excites teenagers and finding the perfect dress tops the list.

Mikayla Lewis was looking to find her ultimate prom dress when her younger sister, Courtney volunteered to make it for her. Courtney, 14 is studying technical design and production at Duke Ellington School of the Arts in Washington, D.C.

Though she has the knowledge, she has never sewed an actual full-length dress from scratch before.

Mikayla initially hesitated to take her sister’s offer due to her lack of experience but she didn’t want to offend her. “I don’t want to be mean and say no, so I’m going to say yes. But I will have a back-up plan of buying the dress,” she said.

The siblings’ mother, Crystal has a family friend who owns a clothing store. Courtney sought for her help and together they started on the project. Mikayla helped choose the fabric and it took the teen five months and countless hours to design, stitch and put together the sequin dress.

Luckily for Mikayla, she didn’t have to resort to plan B.

The prom dress her little sister had created for her was absolutely stunning. She added that she felt like a princess donning the shimmering gown for her prom night.

“I saw her in the dress and, honestly, I thought that I was going to cry a little bit. Because I was like, this is what I made,” said an overwhelmed Courtney.

The sisters must share such a strong bond to have that much trust and confidence in one another.

From what we know, Courtney already has her hands full with the orders that came flooding in after their story was shared online.