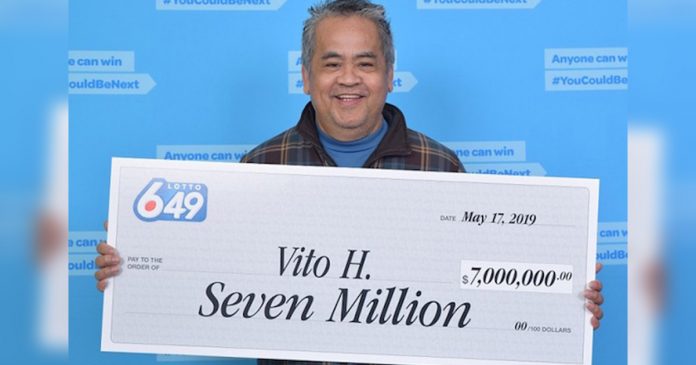 When was the last time you tried your luck buying a lottery and actually winning it? Chances are they are close to none.

For this Filipino janitor though, lady luck favored him when he was announced the winner of Jackpot prize of 7 million Canadian dollars.

Little did he know that after a few days of celebrating his 58th birthday, he would become a millionaire after getting all the six numbers of his ticket right.

Thrilled at his sudden fortune, he made the surprise announcement to his daughter.

“He sat me down at the table and then he whispered really quietly to me that he won $7 million dollars. I didn’t believe him. We had to check online several times,” she said.

“I remember scanning my ticket and seeing all these numbers. I have really blurry vision so I had to hold the ticket right up to my face. I couldn’t believe it,” recalled Vito who is still in disbelief at the fact that he is now the owner of 7 million Canadian dollars.

Vito migrated to Canada from his hometown in the Philippines 10 years ago in hopes to provide a better future for his family. He has three children and is blessed with four grandchildren.

“I buy lottery tickets so I can dream. I dream of being able to take care of my kids and make their future better. Now we’ll be able to buy a nice house for my children and grandchildren,” Vito says.

The janitor says that despite winning the lottery and becoming a millionaire, he will not stop working. It was his job that has provided for him and his family all this while so he intends to keep the hustle going.

9-yo girl trapped alone when elevator slides down 18 floors, saved...