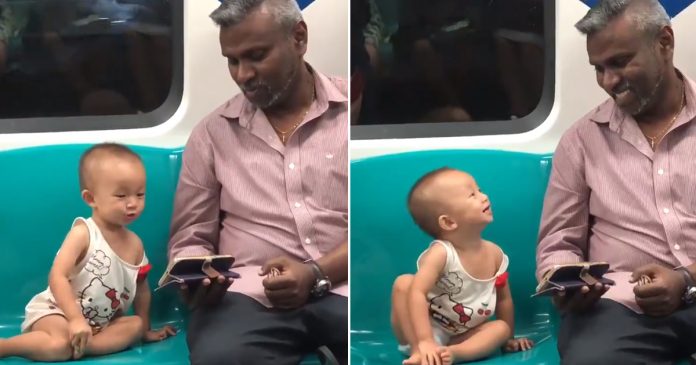 Been having a rough day? Watch the cute candid connection these two strangers share on their train ride. You will surely lit up into a ray of bright sunshine.

Recently, a young woman shared on her Twitter about the adorable morning ride she had with her father.

While they were on board the Singapore MRT a few days ago, a little girl and her mother joined in the ride at one of the stops. Perhaps it was her first train ride hence the little girl seemed quite restless seated next to the man.

He thought he could do something to keep her entertained throughout her journey, so the kind man took out his phone and started playing some cartoon videos.

It wasn’t just any cartoon, but Tom and Jerry.

It must be one of the little one’s favorite shows because she was immediately indulged into the phone. She was enjoying it so much that she broke into loud giggled every now and then.

Maybe her mother thought it was bothersome for her daughter to watch videos on the man’s phone.

The man and her daughter both clearly were enjoying the moment together in each other’s company.

The man’s daughter thought it would be nice to share it online and indeed it seemed so when her tweet blew up to gain over 35,000 retweets and 100,000 likes. She posted a few pictures and a video with the caption below.

“The little baby girl and her mother boarded the train and took a seat next to my dad. the baby was very energetic and she seemed restless. So then my dad decided to play some cartoons on his phone for her to watch. He figured she’d calm down if she was entertained by something. The baby’s mother was also very nice. She seemed really glad that we were playing with her baby.”

We hope that made your day!