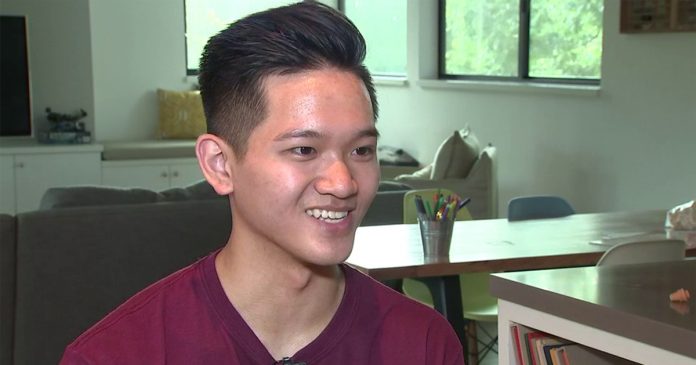 Growing up, Derrick Ngo attended 12 different schools. He came from a troubled family whose parents had a bad relationship and his family’s condition has fueled his determination to change the future.

He had not seen his father since he was 2 years old. His mother, though being there with him, hasn’t been there for him as she was continuously going in and out of jail and the casino throughout his childhood.

The now 18-year-old channeled all of his childhood frustrations into school and will be going to Harvard soon.

“I realized that if I didn’t use school and education and the resources that were available to me, then there would be no way that I would get out of the situation I was in,” said Derrick who is from Houston.

He will be graduating at the top of his class at Energy Institute High School as valedictorian.

Speaking of his mother, he said that she was heavily involved in gambling.

He and his siblings would often time be forced to go to the casino with her, where they’ll spend time at the garage.

Derrick started living on his own when he was 15, but eventually became homeless at 17 when the rent checks his mother gives him barely covers the essential needs.

When asked about his drive and discipline to success, he said,”The key to success is discipline and to never lose sight of your end goals.”

“In having a vision, you have something that you’re working towards. And although it’s not real yet, it’s something that is going to be real one day,” he added.

As of now, Derrick is deciding between majoring in philosophy or economics. He aspires to bring changes in people’s lives regardless of what his future career might be.

An 83-year-old woman wrote a letter concerning life to her friend,...