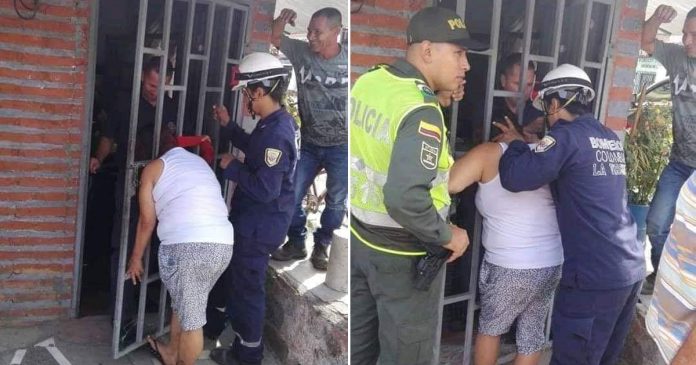 In our lives, we will come across many kinds of people. When it comes to neighbors especially, each and everyone of them has their own quirks that we secretly dislike. We even give them nicknames that only we know. The worst kind of them is the chatterbox who also happen to excessively feed on gossips.

In the city of La Virginia in Colombia, the neighborhood is unfortunately bestowed with one such busybody woman. She is notoriously known among her neighbors for being the loudest, noisiest person. Part of her daily routine is to snoop around the neighborhood to find some interesting inputs to be discussed during the gossip session with her friends.

While she was on a stroll spying the people next door, karma decided to pay a visit.

She got her nosy head stuck between the metal bars of the gate when she tried to peek at the neighbors through it.

It took a while before the neighbors realized what had happened. A few failed attempts of trying to get her out lead to calling the firefighters for help. The men came in time but it took them five whole hours to free her from her predicament.

Though they were genuinely trying to help release her head away from the gates, they could not contain their amusement at how the entire situation come to be.

One fireman was seen smiling as he was holding a rag positioned between the side of the woman’s face and the metal bar.

The firefighters carefully applied pressure to the woman’s head as a police officer kept the door from moving.

The woman was eventually freed with no injuries. The neighbors hope she has learned her lesson and will not go around sneaking in other people’s house for her own joy and pleasure.