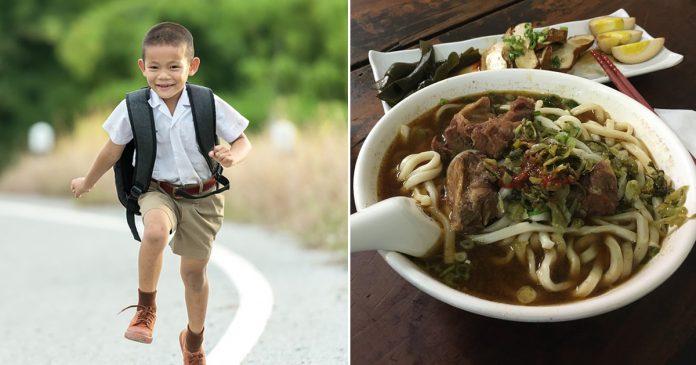 There is nothing more virtuous than filial piety, a profound respect for one’s elders. The owner of a noodle store was overwhelmed when he witnessed how a little boy acted towards his blind father.

One slow afternoon when the noodle store was relatively empty, a boy walked in with his blind father. Their clothes were clean but visibly worn out. The boy sat his father down and proceeded to the counter to place his order.

The shop owner was surprised when the boy nearly shouted his order, “Two beef noodles please!”

As the shop owner was about to prepare the bowls, the boy whispered an apology and switched his order. He asked for one beef noodle and one scallion noodle soup which was cheaper. The owner understood that he wanted to save money but did not want to let his father know.

He went back to his table and when the orders arrived, he placed the steaming bowl of beef noodles in front of his father and he took the other bowl.

The boy then placed the chopsticks in his father’s hands saying “Here dad, be careful the noodles are hot.” His father did not start eating right away, but searched for beef slices and reached out to his son.

“Here son, eat more so you can grow big and strong,” and proceeded to put the beef slices into his son’s bowl.

His son smiled and when his father started eating, he tactfully slid the beef pieces back into his father’s bowl.

His father smiled and commented on how generous the shop was with its portions.

The shop owner felt ashamed. If he had known, he would have given the child a larger portion. His wife was way ahead of him, she walked towards the table carrying a plate of sliced beef and said it was on the house. The boy thanked them and placed a few slices in his father’s bowl and a few in his own bowl.

Dog stares out window every day for something but one day...