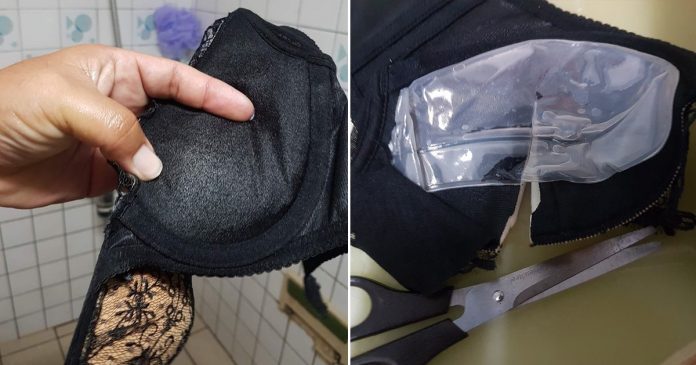 On today’s news of ‘The new age discovery of women’s clothing by a man’, this innocent husband couldn’t contain his disbelief when he accidentally sat on his wife’s bra and it burst and leaked oil.

Of all places, he took to his newfound discovery to the internet and was given a myriad of responses and reactions. It all began when he had sat down on the seat without realizing his wife’s lingerie is under it. As soon as he planted himself down, he heard a loud pop.

Shocked, he woke up only to find a black bra with greasy liquid leaking when touched. He got curious and took scissors to cut open the other three bras of his wife which she bought from the same brand.

To his surprise, all of them were filled with ‘oil bags’.

He was angry that his wife has been deceived into buying such harmful undergarments. “I cannot imagine what would have happened if she wore it”, he said in concern of her health.

The internet community added fuel to the fire when they commented on his unnecessary experiment of cutting the bras open.

“Do you have any idea how expensive those are?”

“Bro, you are finished!”

Apparently, the ‘oil bags’ inside the bra are for support and coverage. They are called the ‘water bra’, that are filled with a mixture of water and oil to reduce the weight of the clothing.

Curiosity may have killed the cat, but this man is surely done for with his wife when she finds out.

A 41-year-old Man Felt Disgusted to Discover that His Wife Abandoned...