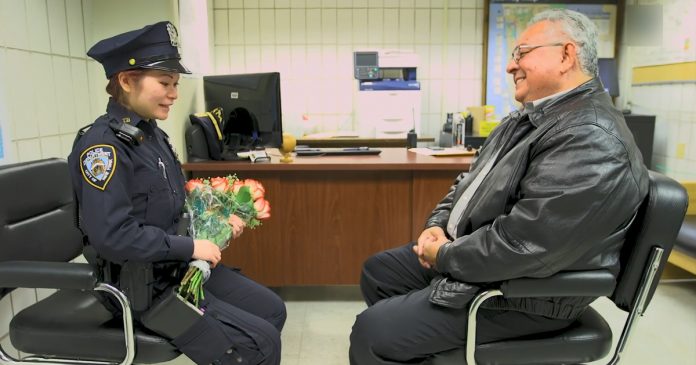 Sally Zheng was 14 years old when then police officer Ralph Torres took her out of her abusive house. One foster care and 20 years later, she is now a police officer at NYPD.

Sally’s childhood was not something she will fondly remember. When police officer Ralph arrived at her door and took her away to the government foster care, she finally felt a sense of security.

“As long as I am there, no one will hurt you,” Sally recalled Ralph giving her reassurance. He had left his phone number with her, but she lost it somewhere along the time. She was determined to find him regardless.

She went to school, graduated from college and eventually applied to become a police officer in hopes that she could reunite with the one person from her troubled past who shone a positive light on her.

On May 25th, she finally was reunited with him. Sally arrived for her morning roll call and was asked to stand by when it was notified that NYPD Commissioner James P. O’Neill was about to make an important announcement.

O’Neill stood in front of her and asked if she knew a retired officer named Ralph Torres.

Before she could even answer, there he stood, the man himself with a bouquet of roses in his hands.

Sally started getting overcome with emotions and they shared a long hug. In the past, Sally had tried to reconnect with him in all possible ways. She even wrote him a letter, and lucky for her, it reached him and lead to this moment of reunion.

The young police officer had been wanting to ask Ralph one important question all this while. She knew he must have thought about her, about how’s she doing in life.

I just wanted to ask, “Are you proud of me?”

Ralph, with a wide smile on his face replied, “Yes, very proud.”