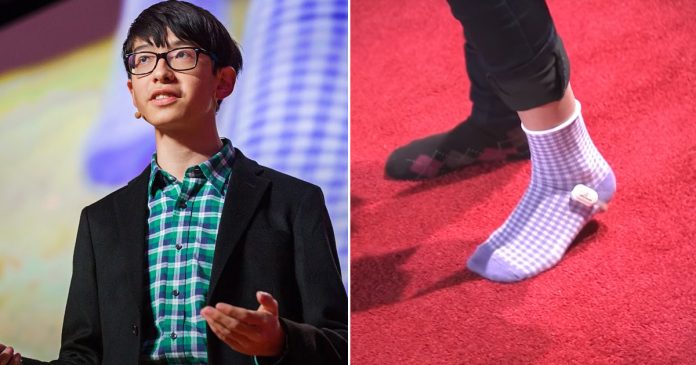 People with Alzheimer’s have a tendency to wander around aimlessly and caregivers struggle to track their whereabouts until a teen invented these socks to solve the problem.

15-year-old Kenneth Shinozuka who lives in Irvine, California came up with a brilliant idea that helps track the movements of his grandfather who was suffering from dementia.

His grandfather’s symptoms started to appear when Kenneth was about 4-years-old and it has only been getting worse.

Kenneth says that his grandfather is prone to getting up in the middle of the night and will wander out of the house. They have been greeted by police officers who had found him wandering aimlessly more than once. His aunt tries to stay vigilant but he still manages to slip past her in the dead of night.

Kenneth then got a flash of inspiration when he absentmindedly saw his grandfather’s feet touch the ground one day.

A thought formed in his mind. He had the idea of attaching pressure sensors on the bottom of his grandfather’s socks to detect when he is out of bed. The sudden increase in pressure could then send a signal to his aunt’s phone.

He spent time learning how to go about creating his idea by watching online videos and borrowing books from the library.

After experimenting with a variety of materials, he came up with a thin pressure sensor that when worn on the bottom of the foot or with a sock detects an increase in pressure and wirelessly sends an alert to a caregiver’s smartphone. He had to learn how to code and create an application that worked with smartphones. He has also set out to beta test his creation on people suffering from Alzheimer’s at various homes.

He attached his device, called the “Safe Wonder” to his grandfather’s socks and it has noted all 437 cases of his wandering out of bed with no false alarms.

His creation has already won him a $50,000 prize and “Science in Action” award from Scientific American Magazine. He hopes to be a neuroscientist and specialize in computer science when he’s older saying “I’d like to solve some of the mysteries of the brain and invent tools to ultimately, I think, cure Alzheimer’s and other mental conditions that our aging population suffers from.”

World’s first flying car that can turn into a plane in...

Too expensive to buy one, tech developer creates real-time translator to...