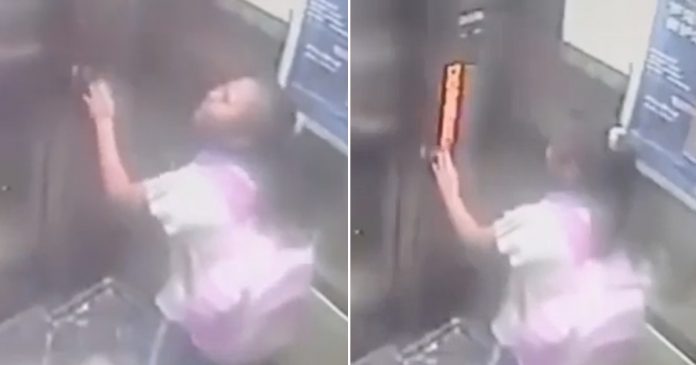 Imagine being the only person in an elevator and just when you thought you’re going to go home after a long day, the elevator blacks out and you’re trapped inside. What would you do in that moment?

Here’s what a 9 year-old did: she pressed all the buttons consecutively over and over again and saved herself from a tragedy.

This untimely incident happened in Shenzhen, China. The little girl was returning home on May 28th and took the elevator in her apartment to get to her floor.

A video footage found on YouTube shows the girl wasn’t all alone to begin with. There was another resident in the elevator who got down at the 19th floor of the building. As the doors on the elevator were closing, the display lights went off.

The girl started to panic as she had no clue if the elevator was going up or down. Then, all of a sudden, the elevator started going down fast. Surrounded with fear, the girl tried pressing the buttons on the elevator’s panel, but to no avail.

She then quickly started pressing all the buttons simultaneously; a lesson she learned in a public safety museum that came in handy.

Fortunately, it worked in her favor when the elevator came to a stop right on the ground floor. She alighted the elevator with no injuries but was severely traumatized by the incident. She was crying on her way home.

Apparently, similar incidents have occurred in the recent past. When asked, the building management covered it saying the elevator was being tested. Dissatisfied residents questioned the lack of prior notice, leading to inspection from regulatory officials.

It was later discovered that the elevator’s system had a technical error. Below is the YouTube video of the incident: