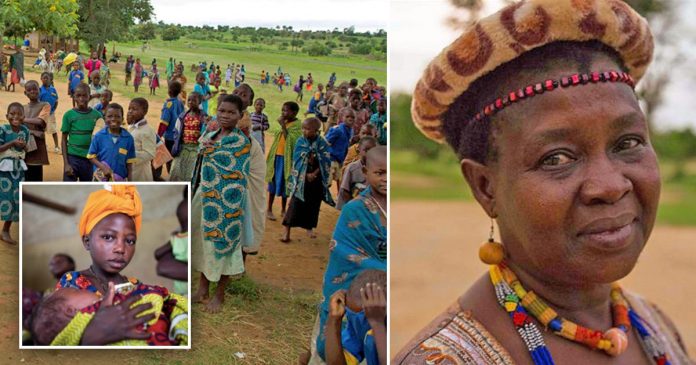 The country of Malawi appointed their first female chief recently and as soon as she came into power, she annuls 850 child marriages.

Malawi is a landlocked country in southeastern Africa and is one of the poorest in the world. Half of the country’s female population are married off before the age of 18. Families allow their children to be married off to older men simply because they can’t afford to keep them.

Though child marriage was banned in 2015, it was still prevailing with permissions from the parents. Theresa Kachindamoto is the youngest daughter of a previous chief in Monkey Bay. She has 12 siblings. Before she became the chief, Kachindamoto was working as a secretary in another town for 27 years.

When the votes for a new chief came in, she was surprised that the majority of her people has chosen her.

To her people, she was always the one with kindness and sense of community and hence they believed they have made the right choice.

Her first act in power was to abolish child marriages.

Not only did she stop these young girls from the potential danger of childbirth complications, she even sent them to school to provide them education.

Kachindamoto knew that it was one absolute way to ensure the girls have a normal childhood.

Despite facing opposition and even death threats, her determination remains unchallenged.  “I don’t care, I don’t mind. I’ve said whatever, we can talk, but these girls will go back to school,” she said.

She knew that not everyone would be in favor of changing a ‘tradition’, so she changed the law instead.

No one comes in her way of work as she stands firm on her practice. She even fired four sub-chiefs who refused to ban child marriage.

Kachindamoto believes that making a change starts from her community first. We need more women like her to bring changes to other women worldwide.

According to Al-Jazeera, a 2012 United Nations survey found that more than half of Malawi’s girls were married before the age of 18. It ranked Malawi 8th out of 20 countries thought to have the highest child-marriage rates in the world.