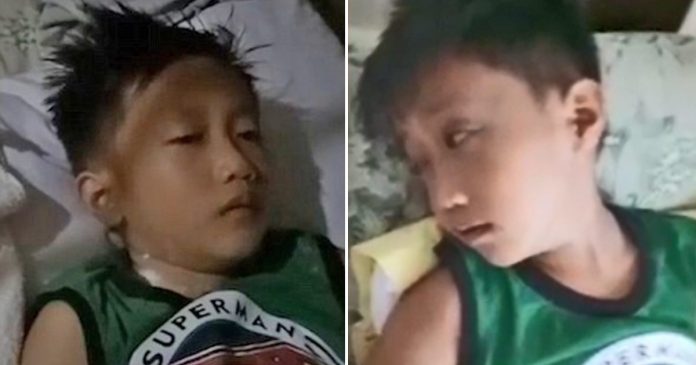 John Nathan Listing is only six years old, and he suffers from facial spasms. His eyes constantly blinked and his lips never stop shaking.

It all began July last year when he started experiencing uncontrollable facial tics on a daily. His parents had to rush him to the hospital because they were extremely worried about their son’s condition.

The young boy from the Philippines was screened using a CT scan and the results came out clean.

John had a healthy brain and was sent back home. More than a week passed and he was still encountering 20 to 30 minutes of seizure every day.

His eyes would not stop blinking and his lips were shaking.

The father, Edgar and the mother, Judee believed that it was the excessive use of gadgets that have caused his son’s sudden symptoms. John would play video games on his tablet for nine hours every day.

”The games were just children’s games, fun and colorful but not violent. He was addicted. John was happy and we never thought there would be a problem. Now he is experiencing tics and seizures all day”, according to his parents.

He would also watch cartoons every day after waking up. After-school hours are spent in front of his gadget screen, which can extend until midnight.

When the seizure did not stop, they were forced to take him to another hospital, the St Lukes Medical Centre, where the electroencephalogram (EEG) scan was performed on John. Yet again, the results came in negative.

Doctors had a theory that the facial spams resembled Focal Seizure.

This condition only affects one half of the brain where the person still remains alert and receptive. They were, however, unable to diagnose it as there was not enough evidence to affirm the belief.

The least they could do was to advice Edgar and Judee to inhibit their son from having any kind of prolonged exposure to gadgets, including television.

Though John’s condition still remains undiagnosed, it’s evident that the symptoms are a result of the extended use of his electronic toys.

Fire department reminds the public why hydrants are no-parking zones