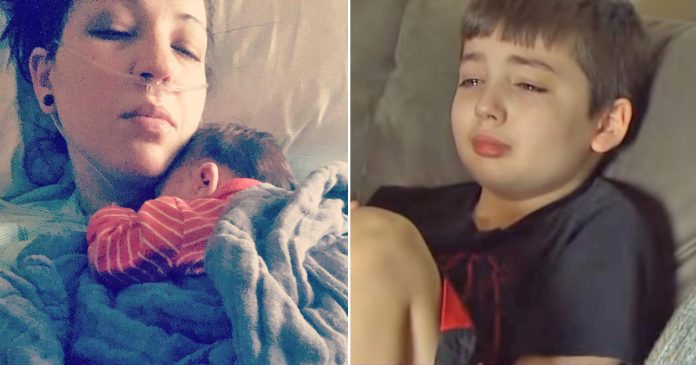 “If I had taken the nap, there’s a good chance it would’ve been a very different outcome. A sad one.”

This is a heartfelt statement from Kimberly Smith, a single mother of three.

She was experiencing difficulties with her breathing but disregarded it. She thought she will be fine once she had taken a nap after putting her baby to sleep.

That’s when her son, Camdyn returned home from school and notice something was wrong with his mother.

He witnessed her having mild chest pains and insisted she followed him to the hospital.

She finally agreed, and thankfully, it saved her life.

A timely visit to the doctor revealed that she had multiple blood clots in both her lungs. This condition is also known as pulmonary embolisms. It would have taken her life if she hadn’t gone to the doctor.

She was admitted for seven days and received treatments for her condition. Kimberly is currently in stable condition and is recuperating.

“He is definitely my hero. They say your life flashes before your eyes, and it’s true. It makes you look at your kids in a whole different way,” Kimberly expresses her gratitude to her son.

During an interview, Camdyn revealed that he learned about the symptoms of embolism from his PE teacher who had similarly suffered from the condition herself.

It’s both impressive and heartwarming to see a young boy like Camdyn acquire the presence of mind and act in time. He is truly an inspiration not only to his mother but to everyone else out there.

Find out what this 9-year-old girl from Mangaluru did to tackle...