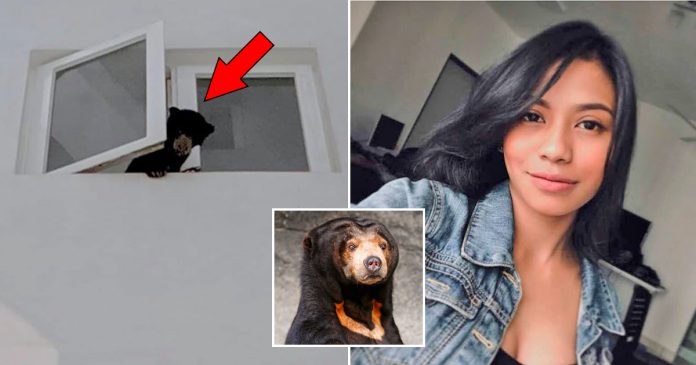 Endangered animals need protection and a safe space away from threats for them to survive. In most cases, they are kept in a conservation center.

This singer from Malaysia thought otherwise when she decided to keep an endangered sun bear under her care in her own house. Her reason? She thought it was a dog.

The 27-year-old former reality show contestant explained that when she first found the cub by the roadside, it was injured and weak. She inched in closer only to find out it wasn’t a domestic animal after all.

Apparently, she had wanted to hand it over to the National Zoo, but only after it has been exposed.

She took the cub back home and even named it Bruno. While she was away for a festive celebration in her hometown, Bruno had decided to peek out of the condominium’s window and let out a loud roar.

Residents recorded video of the sun bear roaring through the window and uploaded to social media.

That’s when neighbors realized its presence and called up the authorities, including the Wildlife and National Parks Department.

She was arrested for unlicensed possession of a protected animal under the law, according to the reports of a local newspaper.

“I was worried about sending Bruno to the zoo while it was ill because the animals there look skinny. I know the bear cannot be reared, it can’t be kept as a pet. I only wanted to save the bear, I had no intention of exploiting it”, she defends her action.

She also claimed that she had taken good care of Bruno and provided him enough food even when she was away. The singer said that she didn’t keep the six-month-old cub in a cage because she knew it was cruel.

In Malaysia, sun bears are listed as an endangered species and protected under the Wildlife Conservation Act 2010.

Mother Dog is Dumped in a Trash Bin in Detroit without...