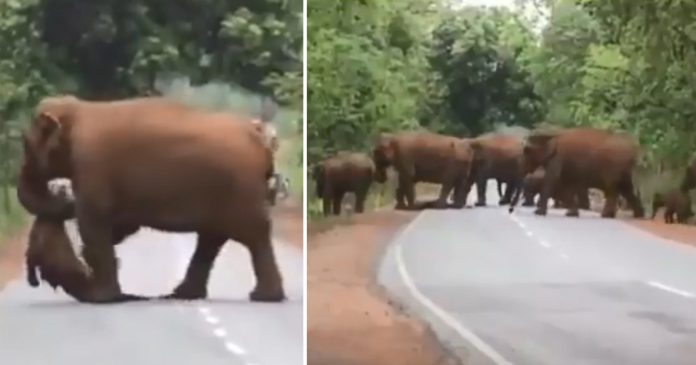 Elephants are known for their intelligence and memory, besides their overall adorable nature.

Indian Forest Service officer Parveen Kaswan posted a video clip on Twitter recently,showing that elephants are capable of understanding emotions such as grief as well.

This will move you !! Funeral procession of the weeping elephants carrying dead body of the child elephant. The family just don’t want to leave the baby. pic.twitter.com/KO4s4wCpl0

In the footage, it can be seen that an adult elephant is carrying a young calf, very much dead in its mouth out of the forest approaching the road.

The elephant then gently puts the carcass on the ground and retreats a few step back. A few seconds pass and another smaller elephant joins the cohort, placing itself right in front of the body.

Before you know it, an entire herd emerges and surrounds the dead calf in what Parveen calls the ‘funeral procession’. All the elephants just stood there in silence, focusing on the carcass. It seemed like they were mourning the loss of their family member.

Elephants are known to be hostile around unwanted human presence, but in this particular situation, they didn’t even realize the group of spectators watching this heartrending scene unfold from a safe distance.

After what seemed like a minute of silence honoring the dead, the first elephant picked up the calf again and disappeared into the wooded are together with its herd. Netizens who watched the video were taken by waves of surprise and emotions.

“This is heart-rending. There’s a lot that humans can learn from animals”, read one comment. Another person tweeted, “Very touching and emotionally disturbing. Elephant’s capacity for complex emotions like grief is truly remarkable.”

Parveen tweeted a follow up mentioning theories about alleged ‘ancient elephant cemeteries’ that can be found in the forest though he is yet to see one.

Elephants travel in herd, which are lead by females. In most cases, they prefer to die by a body of water.

Miracle recovery of a dog who survived 5 days trapped in...