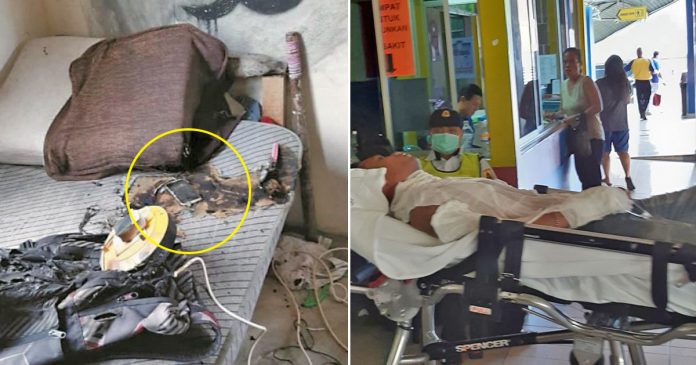 A 21 year-old man was rushed to the hospital after his family members were alerted by his loud screams for help.

When they found him in his room, he had suffered severe burns on his chest and face area. It turns out that the young man had fallen asleep leaving his phone charging on his chest. Unexpectedly, it exploded, causing major injuries to him.

His family members revealed that he has a habit of charging his phone in bed. He also tends to use it while it’s still plugged to the power source until he falls asleep.

The lad hails from the West Malaysian state of Sarawak. He is now being treated in hospital and is said to be in stable condition. Further inquiries report that the phone must have gotten overheated with being charged and used simultaneously.

Unfortunately, the victim didn’t notice the change in temperature as he was already fast asleep. Before he could react, the gadget exploded and caused excruciating pain that shook him awake.

Doctors diagnosed that he suffered 20% burns around his chest, neck and hands. While he is slowly recovering, the exact cause of the explosion is still being investigated.

For better or worse, let this be a lesson for him and everyone else who has the habit of charging their phone in bed or using their phone while it’s charging.

There are many known dangers of using phones under certain conditions, especially when it’s connected to a charger. These power source devices, paired with hot weather makes them highly flammable as they are made of highly conductive cable.

Though the chances are low, you definitely do not want to take the risk to harm your life. Remember, prevention is always better than cure.