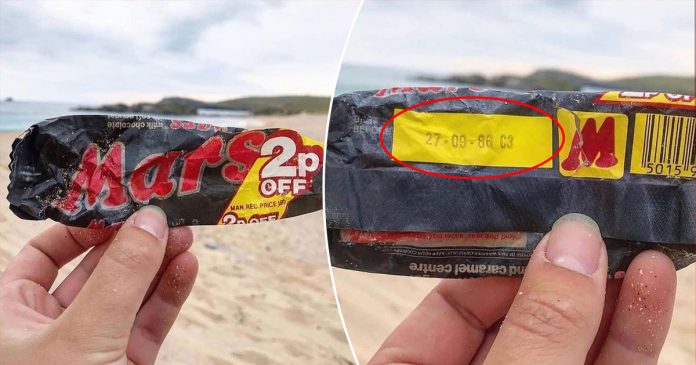 By now, we all know that we’re running out of time to save the earth from a potentially catastrophic climate change. Scientists’ verdict: only 12 years left.

The researches around the globe over the years collectively point out one definite source that is said to mainly initiate pollution, and that is plastic. Plastic is a material that is hard to decompose and disintegrate, given its chemical properties which makes it durable for thousands of years.

Recently, a Twitter user shared on social media his discovery of an old candy wrapper buried deep in the sands of a beach he had visited. A casual glance at the plastic wrapper will make anyone think that it was only disposed of a few days ago.

Mars bar wrapper found on the beach from 1986, but looks like it was tossed out yesterday.
It can take up to a 1000 years for plastic to decompose, that is of course if they ever do. pic.twitter.com/9m1cST9ILy

However, a closer look at the manufacturing date on the packaging will reveal that it is actually dated back to 1986. That’s more than 30 years ago! The man was alarmed at how like-new the wrapper looked after all these years, further proving that plastic waste is almost impossible to get rid of.

The post blew up and sent a clear warning to netizens on the seriousness of pollution caused by plastic waste. People were responding with comments concerning the ways in which plastic usage can be reduced.

Among the trail of comments was an attached video of another user who shared his method of cutting down the use of plastic, especially when we’re at the supermarket buying groceries.

Fr though, he said it best pic.twitter.com/2wvf41U6Rv

His advice is to encourage people to reuse the plastic bags that they get from previous sessions of grocery shopping. Rather than reaching out for new plastic bags to fill in your fresh produces, it’s best to save them and bring them the next time you want to buy things.

These are just a few instances of ‘man meets plastic’ revelation among the other hundreds documented.