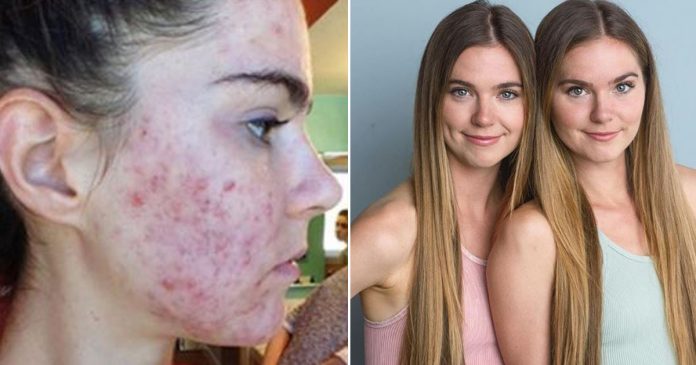 Nina and Randa Nelson are twins who have their own YouTube channel that focuses on vegan diet and skincare. Their Instagram has an impressive following of 60000 followers.

The young women are always seen brimming with confidence on screen. However, it was a different situation altogether 4 years ago. Back then, they were suffering from severe cystic acne which only seemed to have gotten worse over time.

It got to a point where they shut themselves in the house and refused to meet their friends. They were missing their acting auditions and went into depression. “We became hermits’, said Nina to news.com.au.

They consulted many dermatologists and were put under strict medication for one year. Throughout this period, they also tried using different cleansing products to figure out which one worked best for their skin.

Despite already being on a vegan diet and continuous medication, Nina and Randa did not see any visible improvement to their skin. Then, they decided they should completely get into a plan rich in vegetables and low in fat.

They dived into a fully plant-based diet, avoiding dairy, oils, nuts, peanut butter, avocado and meat of any kind. Their meals consisted mostly of carbs such as potatoes, beans, rice, pasta, bread and oats, fruits, vegetables and smoothies. It’s not a no-fat diet but instead, a low-fat diet as they are still getting fatty acids for their bodies.

6 months into their new diet, the now 24 year-olds began seeing effective results. There were barely any acne or blemish on their skin. They believe that the food they eat has a direct relationship to their skin’s health.

Following their success story, Nina and Randa released ‘The Clear Skin Diet‘, a book that details their progress from having breakouts to achieving flawless skin.

They also actively post their meal recipes on YouTube, proving to people that a vegan diet can be just as delicious as regular food with meat in it.

It turns out that you are indeed what you eat!

This baby’s parents could not figure out why he kept scratching...