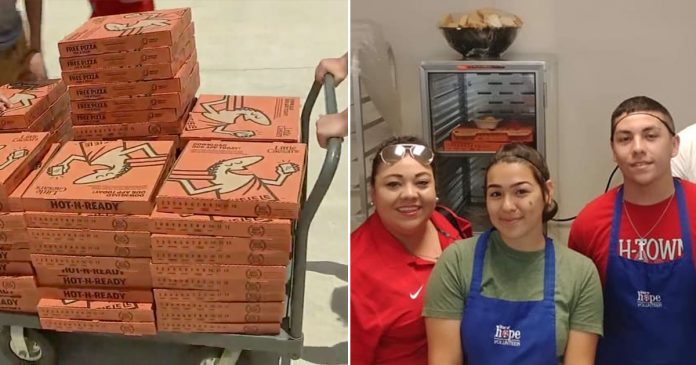 The best way to find out if a child has been raised right by their parents is to see how they treat strangers.

While most kids her age are busy throwing fancy graduation parties. Leanne Carrasco though about feeding the needy.

The Waltrip High School senior gathered her family and friends to throw a meaningful pizza party.

Today was such a special day. We were able to serve pizza, water and snacks to about 200 women and children along with…

The Star of Hope Family Development houses some 200 homeless women and children.

Leanne had been volunteering there in the past and decided that she should do something more impactful for them.

Together with her family, they ordered 95 pizzas and put together some 400 hygiene bags which they have worked over a month to collect the things. The gift bags included toothpaste, toothbrush and soap.

Not only that, they served the food and distributed the toiletries all by themselves.

Leanne wanted the residents to know that no matter what, there are always people out there to care for them.

“It’s very fulfilling to know that I’m able to help others instead of just helping myself. It feels so amazing,” she told Komo News.

Leanne feels that it’s unfair to neglect someone just because they aren’t privileged enough to have the same options like her. They need help, so she gives it. When she first told her parents about it, they agreed right away.

On the special day, 200 Star Hope residents stood up to give an honorary standing ovation to Leanne. The children lined up to give her hugs.

A spokesperson for the shelter, Scott Arthur expressed his gratitude to the kind teen for showing the women and children that they are cared for. He added that they respect people like Leanne and regard them as peers.

Instead of a graduation party, Waltrip HS Senior Leanne Carrasco asked family and friends to throw a pizza party for the homeless women and children @StarOfHope. They provided and served 95 pizzas and made and distributed 400 "toiletry bags". pic.twitter.com/Oy0kucI5Yi

“I think you should always know you’re lucky to have what you have. Don’t take that for granted and continue to give,” Leanne says to everyone out there.