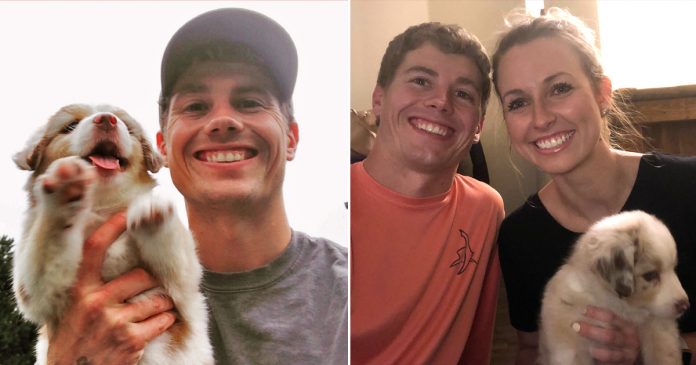 Move over dating apps. Facebook is out here matchmaking people quicker than one can imagine.

Savannah Campbell was in a pet chop purchasing a special water bowl for her dog. On her short trip, she met an adorable puppy and the guy who adopted it. She told PEOPLE that the puppy had “bright blue eyes and cutest little face”.

What, or precisely who, left a lasting impression on her was actually the cute owner of the cute puppy.

She chatted with the guy for a bit at the pet shop before she had to leave to finish her errands.

Later at home, she realized she couldn’t stop thinking about the puppy-owner duo. While she was out on a business trip, she posted a Facebook status about her chance encounter.

“Shameless request for a viral love story. I met a guy in a Petco … Sunday, I didn’t catch his name but he is the new daddy to a gorgeous little 7-week old puppy named Rosy. He was with another guy who had a super cute older Lab…” wrote Savannah.

She wasn’t quite expecting anything but much to her surprise, the story got viral and people starting sharing it in the quest of helping her find the man. In no time, Daniel Vance was found.

The news reached his friend who was at the pet shop with him, and he had asked Daniel to get in touch with Savannah. She managed to return from her business trip and he greeted her at the airport.

“He waited up for me to get off my flight and he was so sweet. We played with Rosy and he walked me to my car and even opened the door for me! He definitely gets the first impression rose”, says an impressed Savannah.

The couple later figured out that they lived only three minutes away from each other but might not have met if it weren’t for Facebook.