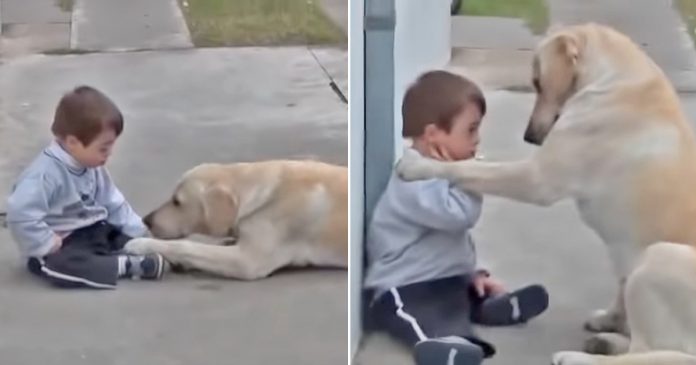 Nothing can put a bright smile on your face quicker than the heartwarming antics of man’s four-legged best friend.

When it involves human connection especially, dogs seem to have a soft spot for us like we do for them. A recent video is being circulated on the internet that perfectly captures the beginning of what looks like an everlasting friendship between a little boy and a Labrador.

Hernan is the most adorable young boy who suffers from Down Syndrome. Himalaya, on the other hand, is the warmest, fluffiest dog who belongs to Hernan’s uncle.

He had stopped by to visit Hernan and his mother, Ana and decided to bring Himalaya along. Little did he know that it would turn out to be the best decision he had made.

As soon as Himalaya laid his eyes on Hernan, they connected. Ana and her brother realized that this was a special moment and documented the beautiful bond between the canine and the child.

The video begins with Hernan and Himalaya sitting facing each other at a comfortable distance.

They exchange looks and start inching closer towards one another, with Himalaya extending his paws to touch Hernan.

Soon, the little boy reciprocates with similar gesture and starts moving around. Here’s where it gets exciting; every move Hernan takes, Himalaya seems to follow suit. They couldn’t contain their curiosity as they keep touching each other’s faces every now and then.

Then comes the finale where Hernan leans forward to hug Himalaya and the canine responds by resting his large head on the boy’s legs.

They continue exploring their friendship, just enjoying each other’s company.

The beautiful scene has mellowed the hearts of netizens who admit to even shedding a few tears watching an innocent friendship unfold.