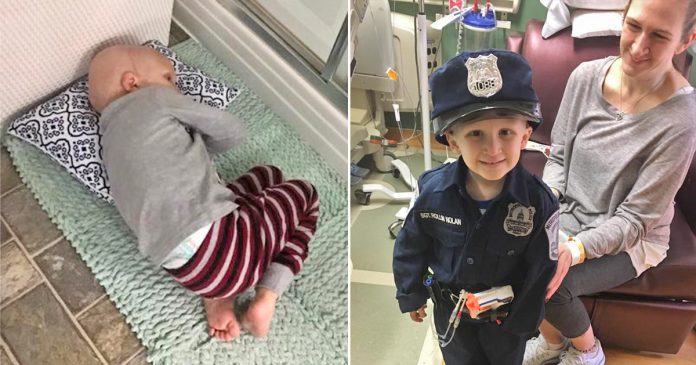 “I ran and jumped into bed with him and put my hand on the right side of his face. Then a miracle that I will never forget happened. My angel took a breath, opened his eyes, smiled at me and said ‘I Love You Mommy’.”

Posted by NolanStrong on Wednesday, October 19, 2016

This is the very final moment Ruth shared with her son, Nolan before he passed away of cancer, as reported by iheartintelligence.com.

Nolan Ray Scully was three years old when he was diagnosed with Metastatic Alveolar Rhabdomyosarcoma. It is a soft tissue cancer that causes rapid development of cells in one’s skeletal system.

He had been battling the disease for one long year, with his family and doctors fighting alongside him. He has a Facebook page dedicated to document his last living moments on earth.

Nolan was a boy of strong faith. He always showed strength and courage in the face of pain. He had always wanted to become a police officer and serve the people, like his father who was a firefighter.

Posted by NolanStrong on Friday, February 3, 2017

Unfortunately, things weren’t going so well for the little boy. His oncologist explained to Ruth and her husband that the cancer is growing resistant to all the treatments they have tried. The only option left was to keep Nolan as comfortable as possible during his final days.

Ruth was having a heartfelt conversation with her child when at one point, he said to her, “I’ll just go to Heaven and play until you get there! You’ll come, right?”. The innocent little soul!

He knew he was counting his days yet he was prepared for it. He didn’t want Ruth to know how much in pain he was so he held on tight to his faith.

Nolan passed away in the embrace of his mother, surrounded by his loved ones.

Posted by NolanStrong on Thursday, October 27, 2016