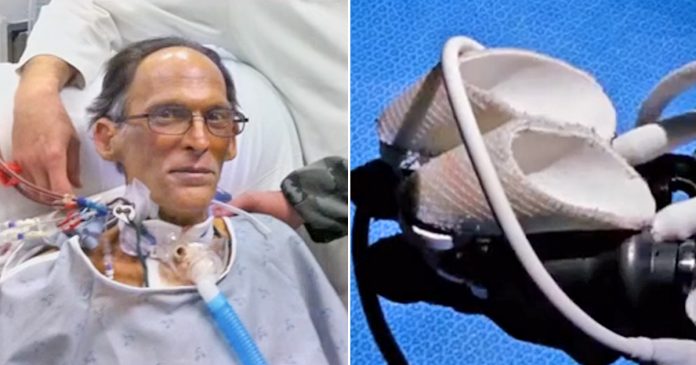 “I listened and it was a hum, which was amazing. He didn’t have a pulse.”

This is the astonishing statement of Linda Lewis, wife of Craig Lewis, the world’s first heartless man. Craig was diagnosed with amyloidosis, a jeopardizing heart disease at the age of 55.

The autoimmune disease a rare kind as it causes the inner organs to be filled with sticky protein build-ups that inhibits the functions of major organs such as the kidney, heart and liver, reports The Science News Reporter.

Craig was on the verge of dying when Dr. Billy Cohn and Dr. Bud Frazier proposed a solution that was first of its kind.

They suggested the installation of a device that allows the continuous flow of blood in his body without actually having to need a pulse.

With an estimated 12 hours to live, Craig and his wife had to make a quick but life-altering decision. Fortunately, they agreed. In March 2011, the device was put into Craig in replacement to his heart.

According to Daily Mail, the patient’s condition has tremendously improved by the next day of the procedure. He was up and speaking to everyone.

The two doctors are from the Texas Heart Institute and have developed the device some time ago. They had been testing it on 50 calves and found it to be perfectly functioning.

The animals were able to do everything they usually do, without having an actual heart and pulse. Craig was able to function the same with the device aiding his blood flow throughout his body. He lived for five weeks later but unfortunately died passed away due to underlying disease. However, the doctors said the heart worked perfectly.

The feature length short titled ‘In A Dream‘ had been nominated for two Emmy awards in 2010.

Thanks to science and innovation, Craig is given a second chance at life.

“I’ll wait for you in heaven, Mommy” Touching words of a...