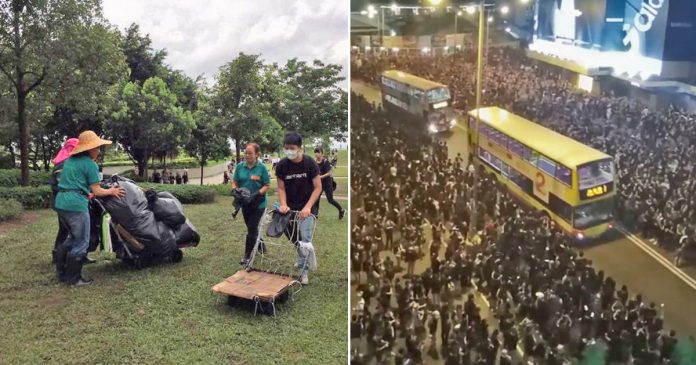 The Hong Kong government has been facing backlash from its people for years now.

Adding to the list of problems is the issuing of a controversial extradition bill that allows suspects and criminals to be flown to the mainland for questioning.

It has stirred dissatisfaction among its people and the result is an estimated 2 million Hong Kongers, who easily make up one-fourth of the population rallying along the streets in protest of the decision.

However, the focus for today’s story is not the violence that was involved. These people fought for their rights in the most civil way possible, and there are pictures to prove it.

If you imagine the roads to be filled with trash everywhere after millions of people have walked on it, think again.

They collectively cleaned up the fields after the protest to clean the leftovers, setting an example to other countries on how to stand up for their rights without having to leave negative impacts.

Water bottles were strategically placed along sidewalks for protesters to clean themselves up in case of a teargas attack.

To further avoid the risk of being hit with pepper sprays, they shielded themselves using umbrellas.

Not only that, when an ambulance was struggling to get past a sea of crowd, it took them no time at all to clear the way for the ambulance to reach the hospital in time.

What impressed everyone the most was that even though the younger generation participated in the rally, they did not forget their own responsibilities and studied for their exams whenever they can.

Standing for hours under the hot weather surrounded by sweat and hunger didn’t seem to bother them.

Volunteers came prepared as they formed a human wall to shield the first aid area from getting attacked.

The rest of us surely can learn a thing or two from them.

This one-of-a-kind union between a gorgeous woman and a short man...