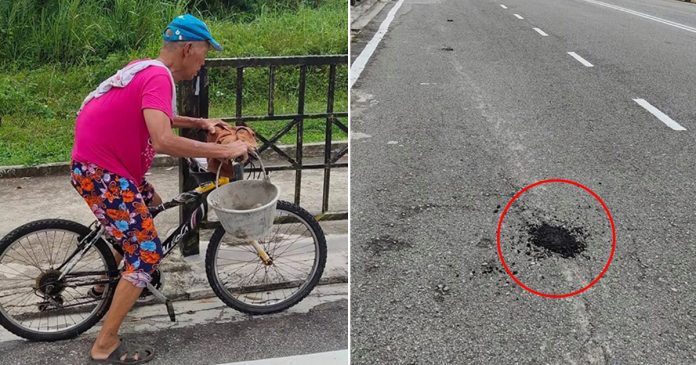 Every neighborhood has a local hero who goes out of their way for the wellbeing of the others.

For residents in Johor, Malaysia, it’s an old ‘uncle’ who rides a bicycle with a pail of tar in his hand.

He roams the neighborhood on the watch for potholes to be filled and fixed.

Malaysians generally regard elder men as ‘uncle’ out of respect. Apparently, the old man has been doing this regularly and is well known among the locals. Persatuan Bangsa Johor shared his story on their Facebook page.

A man by the name Mohd Faizal recalled how he was riding his motorcycle in the neighboring street and saw a small figure squatting in the middle of the road. He reached closer and found the ‘uncle’ to be filling the potholes with tar from the pail.

“I am absolutely clueless as to how he manages to find the leftover tar for the fix-ups,” writes Faizal. He thanks him for his contribution and prayed that the kind man is showered with blessings for his good deeds.

One netizen applauded his work, mentioning that it should be him being the mayor of the area since he is doing their job for them. He deserves more recognition than just a word of gratitude, he says.

“This uncle has served the community. When there is heavy rain and the traffic lights are out, he will become a traffic warden and help give direction to the vehicles. He doesn’t care if he is drenched,” read another comment.

One resident in particular recalls him having a good memory. “I saw him at the traffic once and he asked me how my daughter was doing. The first and last time he met my daughter was when she was young. It’s been 10 years since.”

A true local neighborhood hero you are, ‘uncle’!

Best Job On The Planet: Meet the woman whose job is...