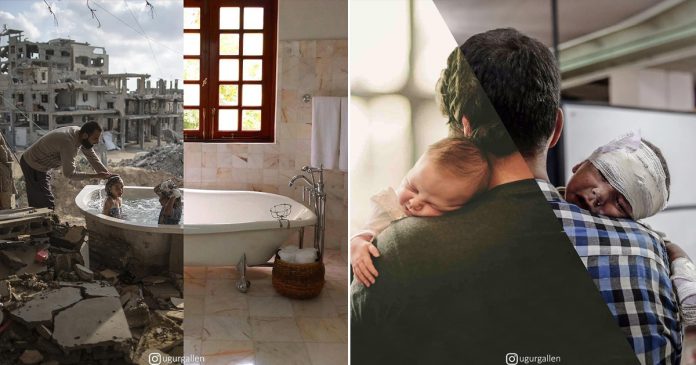 Being ‘born with a silver spoon’ is not just an old saying, it’s a privilege not many are willing to agree with.

Uğur Gallenkuş is a Turkish visual artist who recently published a series of photographs under his project called “War and Peace: Another World”. He delves into the two very contrasting worlds of peaceful comfort and war-struck chaos.

The inspiration behind his work is the never-ending ordeal his neighboring country, Syria had been experiencing since time immemorial. Vanity Fair writes about how powerful pictures and movies are in this digital age for people to reflect on the life they have been granted.

Uğur’s images perfectly capture the reality we live in; where being born on the ‘right’ side can be just a case.

The series consists of picture collages of two different situations at two different parts of the world that are merged to make one coherent image.

They carry a strong message that implies despite our differences, we live under the same sky.

It’s a wake-up call to all of us, now more than ever, to open our eyes wide and look at what’s happening to our brothers and sisters across the world.

We may be spending our days complaining away at our 9 to 5 job, our mundane meals and mediocre houses but there are millions out there who would kill to have a gulp of water and a roof under their head for just one night.

The photographs also serve as a reminder to us to be grateful with what we have. We might think we have it tough, but it’s just a small, insignificant fraction compared to those in poverty-stricken countries.

Rights and wrongs are more than just mere words, for someone it could change their entire life.

“Small house might be a way for one to be mindful...