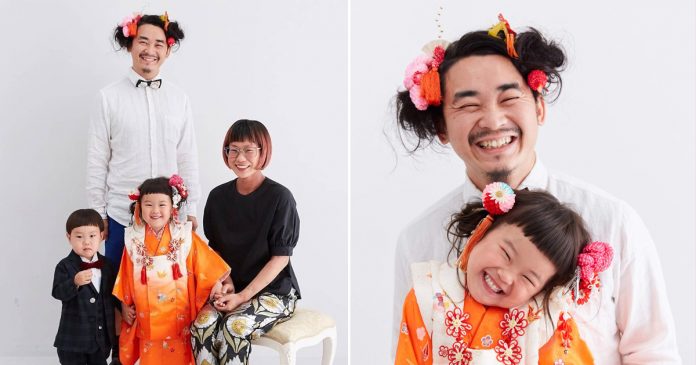 A parent-child relationship is precious as it is. Though what makes it all the more special is the bond between a father and daughter.

Daughters are generally more close to their fathers compared to their mothers. The bond is inseparable fathers are daughter’s first hero. In their eyes, there’s nothing in the whole wide world their dad can’t do.

As for the fathers, being a male, it is a new responsibility to learn and understand the opposite gender through their daughter. Sometimes, dads go out of their way to show their love for their daughters.

Yuma Kumata went to the extreme and grew his hair out for two long years just so he and his daughter can share the same hairstyle. How adorable! The Japanese father is a photographer and videographer by profession.

It’s a tradition in Japan to celebrate Shichi-Go-San, a rite of passage festival for five-and three-year-old girls and seven-year-old boys.

To make his daughter’s first celebration memorable, the father had grown his hair long for a special photo shoot he had planned.

He shared the pictures on his Twitter account and netizens are overcome with delight at how cute they look.

The father and daughter are seen to be donning the vibrant traditional outfits with the most adorable space bun hairstyle complete with the hair accessories and all.

What garnered the attention of 14000 retweets and 73000 likes was the pearly whites-flashing smile they both shared! It looked like they were almost twins, only with different heights!

According to World Of Buzz, Kumata shared that his daughter was very happy on the special day, which is celebrated annually on November 15.

It’s absolutely heartwarming to see fathers and daughters share a bond unlike any other. Share this story with your father/daughter and tell them how much you love them.