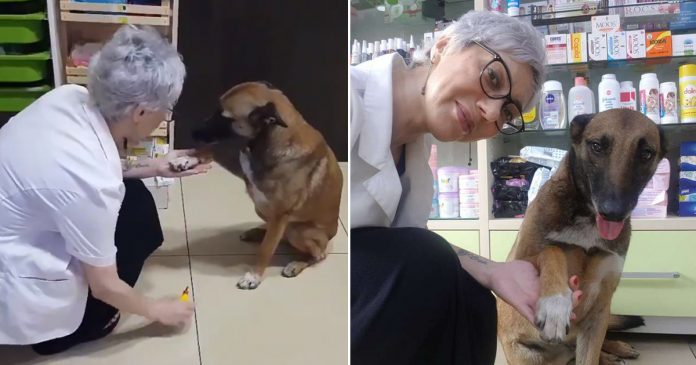 When a stray dog entered a pharmacy and went straight up to Banu to show its wounded paws, there is no way she could refuse to help.

Banu Cengiz is a pharmacist based in Turkey. She has a soft spot for animals, especially dogs and does everything within her capacity to look out for them.

Her very own pet dog, Dorothy was a stray she rescued from the street years ago.

The region where her pharmacy is located is a common area for stray dogs. They fill the place wherever they could for a nap and survive on leftovers given by kind strangers.

Banu personally has a cozy little space in front of her store for the canines to eat and sleep as they wish.

While most of the dogs spend their days lounging in the special nook outside the pharmacy, one particular stray was waiting at the door, as reported on The Dodo.

Banu welcomed her inside and the sweet dog quickly sat and showed Banu one of her paws. It turned out the pup had a cut and was bleeding.

Banu reached for the medicines and cleaned up the wound. She applied antiseptic and gave her antibiotics. The pup seemed to understand and was calm throughout the treatment.

Once Banu was done, the dog laid her head on the floor.

“She was saying, I trust you,” delighted Banu.

The dog’s gestures proved how thankful she is to have come to Banu for help. Banu provided a dog bed, some food and water for the pup to rest and recover inside her pharmacy.

As the day came to an end, it was time for the dog to return to the street life she’s used to. One thing is assured though, Banu and her kindness will be remembered forever.