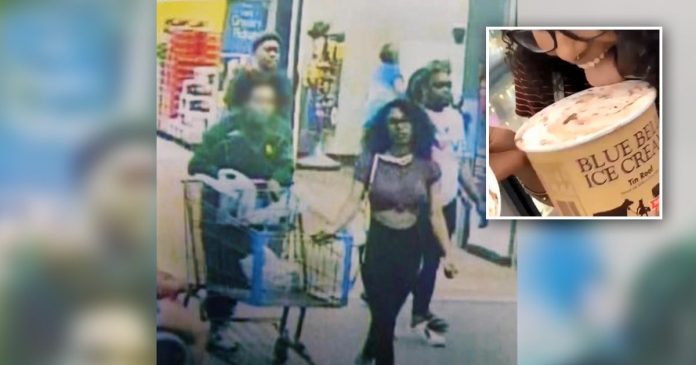 These days, it seems like people are willing to do anything to get their 15 seconds of fame, even if it makes them look ridiculous. One such instance was recorded on a video and circulated on Twitter.

In the video, a woman is seen licking the surface of a Blue Bell Tin Roof flavored ice cream before she proceeds to put the lid back on the tub and stash it back into the freezer with the other tubs of confectioneries.

The woman appeared to be smiling and laughing as she does the questionable act and eventually walks away, proving she was deliberate with her intentions.

What kinda psychopathic behavior is this?! pic.twitter.com/T8AIdGpmuS

The unnamed woman who has been dubbed “the Lufkin licker” because the incident took place outside a Walmart branch in Lufkin, Texas, around 11pm on 28 June.

Another photo of the Lufkin licker has been released. Police said she's wanted for licking a tub of Blue Bell ice cream at a Walmart in East Texas. https://t.co/y9BSPnoivr #kprc2 #HouNews #Walmart #BlueBell @ILoveBlueBell pic.twitter.com/07nuj8sJE9

The video went viral and has been viewed more than 11 million times since it was posted in late June with a majority of the netizens urging authorities to arrest the woman under moral charges.

Many questioned the quality procedures from the manufacturers as to why the lid on the ice cream was easily opened.

The video caught the attention of Blue Bell Creameries who shared their response by condemning the act.

They assured to look into the issue immediately besides taking legal actions on their behalf.

Representatives from Blue Bell Creameries further explained that during production, their half-gallons are flipped upside down and sent to the hardening room where the confections freeze up until the lid, forming a natural safety lock. The lids are then frozen tight with the cartons.

“The safety of our food is our number one priority and we work hard to produce a safe product as well as to retain the trust and patronage of our customers”, Blue Bell explained.

Police have identified the woman suspect as a juvenile and will be charged together with her boyfriend, an adult who took part in recording the video.

VIRAL BLUE BELL VIDEO UPDATE: We have identified the “Blue Bell licker” as a juvenile from San Antonio. Under Texas law,…

In a statement, Lufkin police confirmed that the crime could carry up to 20-year imprisonment as punishment and said the department was consulting with the Food and Drug Administration (FDA) over possible federal charges.