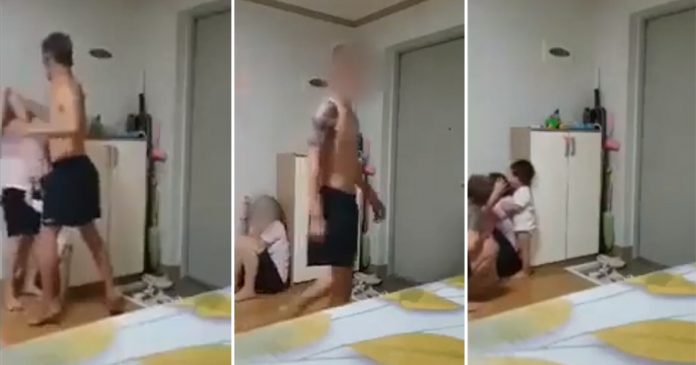 While the world is going through a myriad of modernization at an alarming speed, some unsavory matters are still prevalent for generations now.

Domestic abuse is one such issue. A 36-year-old Korean man was recently caught on camera for physically and verbally hurting his 30-year-old Vietnamese wife. What’s worse is that the abuse went on for three hours, in the presence of their 2-year-old son.

Mothership SG reports that the man was beating her while constantly shouting “Didn’t I tell you, you are not in Vietnam?” The man was believed to be drunk and had initiated the assault after the wife had cooked Vietnamese food, which he didn’t like.

The incident occurred on 4th July at around 9 pm. It can be seen in the video that the man was kicking and punching while cussing her out in a rage.

Later on, it was discovered that the cause of his anger was also her Korean speaking abilities which he was clearly dissatisfied of.

He even hurled an empty soju bottle towards her, which would have landed on her head if she had not covered herself with her hands.

The woman was seen helpless as she just cowered herself at the edge of a cabinet while her little son cries his heart out watching his mother taking blows from his father.

The abuse ended in the woman suffering broken ribs which will need one month to recover from. The Yeongnam Police Station in South Jeolla province received a call from the woman’s friend who had reported the incident the next day on 5th July.

Apparently, the abuse has been going on for quite some time now. The man would start swearing and hitting her after drinking. The woman and her child are currently placed in a local shelter.