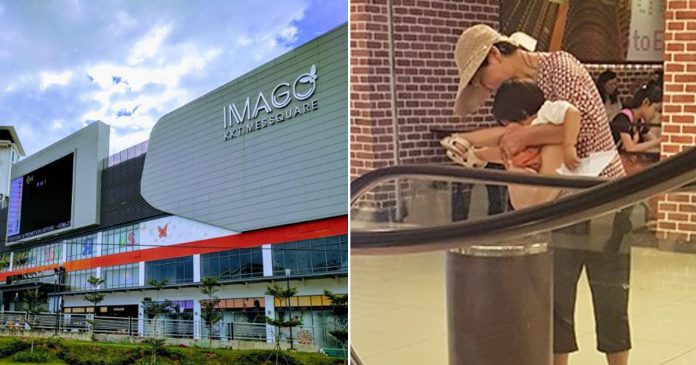 Public facilities are built to cater to public needs. However, it is our responsibility as the said public to know the dos and don’ts at such common places.

Recently, a netizen from Malaysia took her disgust to Facebook when she posted a status explaining an unhygienic incident she witnessed in a shopping mall.

“I’ve usually only read about such uncivilized incidents, this is the first time I’m actually witnessing it,” wrote Bonnie Wong. The pictures that accompany the post shows an elderly woman carrying a child in her hands, with their pants down.

What happened next left her dumbfounded. The woman proceeded to usher the child to a rubbish bin nearby and made him pee inside it. How disgusting!

Usually I only read how uncivilized the mainland tourists are from post that viral from FB.. And today I witnessed it…

To make it worse, the rubbish bin was situated in front of a restaurant and nearby an escalator where people were actively walking by.

Her post came by as a warning for people to sanitize their hands or be cautious before touching rubbish bins at public places. She knew that trash bins are unhygienic as it is, but after the shocking scene, she learned that it could be much dirtier to a level that can harm health.

Her post gained attention quickly, but other netizens began questioning her intentions. She was asked why she didn’t confront the lady about her actions, or report to the security at the mall.

Bonnie explained that she was too stunned at the horror in front of her eyes that she was unable to think of what to do. She also explained that even if she went looking for the securities as they were not available around the scene, the perpetrator would’ve left by the time she came back with them.

She repeatedly advised the public to ensure their sanitary level at malls. She also assured that the incident will be reported to the mall’s authorities to prevent similar incidents happening again.