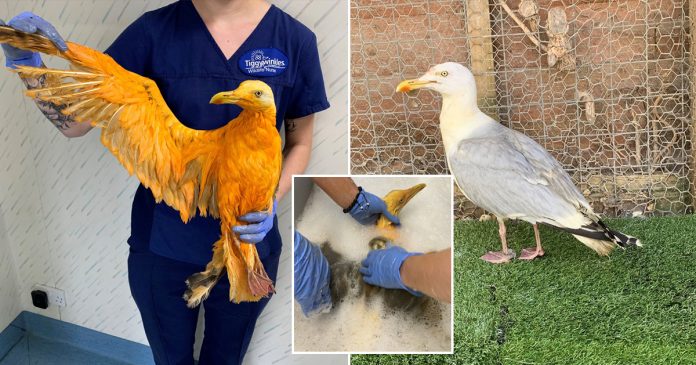 What’s bright orange, has feathers and can fly high? A curry-drenched herring seagull, of course!

And no, it’s not a fan fiction of some crazy ethnic bird novel. It’s an actual case that came to the attention of Tiggywinkles Wildlife Hopsital in United Kingdom on 1st July, as reported on Mothership SG.

The hospital staffs had received a call from the locals who claimed to have rescued a bright orange bird off the side of a highway.

They were clueless as to what to expect as there weren’t any additional information besides the avian’s color. However, when the large bird was brought in for treatment, it was discovered that apart from its vibrant hue and pungent smell, it was a species they were familiar with.

“He had somehow gotten himself covered in curry or turmeric! It was all over his feathers, preventing him from flying properly,” wrote the hospital in a post in for its Facebook page.

The bird just needed some intense scrubbing to take the color and smell off him. The pictures posted shows the might bird having a great pampering session, being soaked in a large sink of bubbly waters, getting gentle massages from the staffs.

Fast forward, the gull is all cleaned and free of strong turmeric scent. He is affectionately named Vinny, after the much favored vindaloo curry that Brits love.

“He is now looking much better and should be able to go for release very soon! As we say, we never know what will come through our doors next!,” reads the bottom half of the Facebook post.

Tiggwinkles Wildlife Hospital ended the story of their curious case of a curry-scented gull with a heartfelt thanks to the kind people who helped rescue him and alert them of the situation.