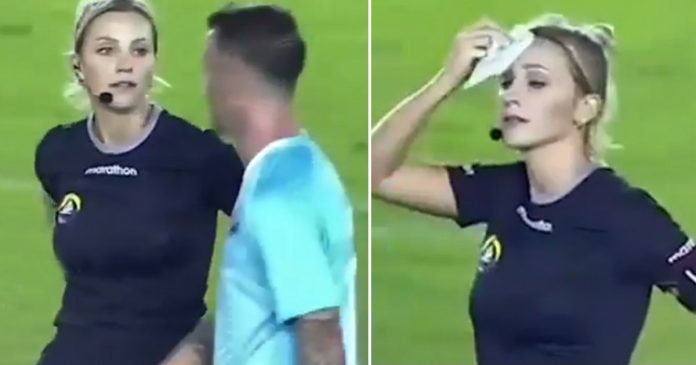 A game well played…by the referee.

Fernanda Colombo is a 30 year-old sports journalist, reporter and commentator. Occasionally, she plays the role of a referee. In a recent football match for the Ecuador league, she pulled up a card up her sleeves that had netizens entertained.

During the friendly match, Colombo is seen to call upon Kitu Diaz, one of the players for Barcelona Sporting Club. The call of gesture was made right after he had performed a move.

While Diaz was walking towards her, Colombo reaches for her back pocket. Everyone in the stadium, including Diaz thought she was about to flash a penalty card for the move he just made.

As Diaz approached and stood in front of her, Colombo takes out a white handkerchief and proceeds to wipe the beads of sweat dripping from her forehead. How smooth was that!

The entire stadium filled with audience and players broke into gasps that turned into laughter. It was entertaining to watch her trick Diaz into thinking he was about to get a penalty card.

I’d love to see a Premier League ref do this after a debatable 50:50

Watch the players squirm for a few seconds ? pic.twitter.com/kC1nobszXf

While the tweet was shared across social media for its humor, Colombo also received unsavory emails that emotionally disturbed her. She later shared the details of the email on her Instagram.

Her caption read, “I would like to inform everyone that I will only do what my heart pleases, and in this case, it’s working in the field of football and journalism. Please, have some respect for me!”

Following her sense of humor and professionalism, Colombo has now gained popularity among people. Her Instagram account currently has an impressive 456,000 followers.

Follow The Sacred Riana’s response on winning Asia’s Got Talent. Her...