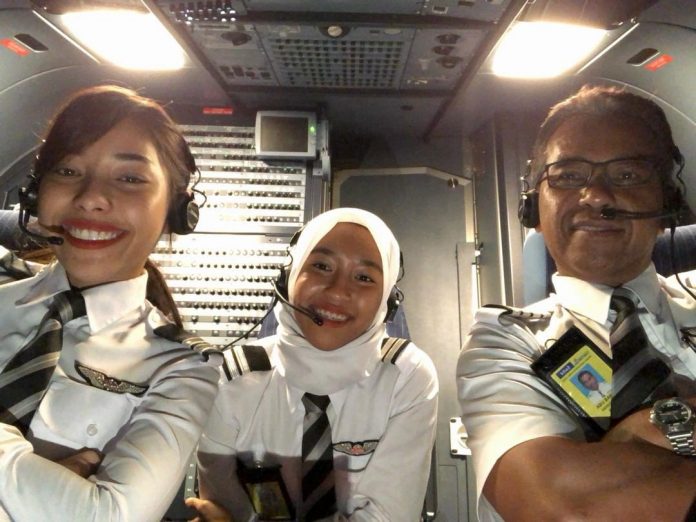 Parents are the number one supporters of their children and their achievements. At times, they go out of their way to see them doing their best.

This one particular father from Malaysia went way off his radar and left his long term job to work with his 2 daughters. One of his daughters, Safia Anisa shares on her Twitter about her father’s unbelievable gesture of support.

This man left the company he's been w for 40 years, started fresh as a junior, got a new rating at the age of 58, just so he could fly w 2 of his annoying daugters. I cannot tell you how grateful i am for this. Alhamdulillah, i finally got to fly w my abah! :') pic.twitter.com/NQGGO4ucLO

Safia’s father is a senior pilot at Malaysian Airlines (MAS). He has been working there for 40 years. When both his daughters took after his footsteps and graduated from the flying academy, he had a surprise waiting for them.

Safia and her sister secured jobs with Air Asia as pilots. On the first day of their job, their father was there flying with them as a junior pilot, starting afresh at the age of 58. The sisters are completely overwhelmed and grateful for their father’s sacrifices.

In the pictures shared by Safia, all three of them are seen clad in white uniforms in the cockpit, wearing their best smiles on the best day of their lives. The response from netizens for the young pilot’s tweet were tremendously heartwarming.

In a follow-up tweet, Safia explained how her father had started his career with MAS.

Aww thank you for the well wishes everyone!! ♥️ Just for clarification, my dad started flying right after spm, he was a cadet for MAS. After 40 years there, me and my sister both got a job at airasia. He then decided to come to airasia so he could fly w us before he retires! pic.twitter.com/bx6tOPqkMR

He started flying right after high school at 18 years old and thought he would fly with his daughters for one last time before he retires. How sweet is that!

Netizens surely had some words to share with Safia.

One of the tweets mentioned how both the siblings and their father share the same smile.

All of you smile with your head slightly tilt to the left. So being a pilot is not the only thing you gals learned from him.

A good part of the tweets were wishes from strangers for the wellbeing of the family. They shared prayers and blessing for them to serve their job well. Some even took this opportunity to as for free rides.

We wish the siblings and their father all the very best for their future undertakings.