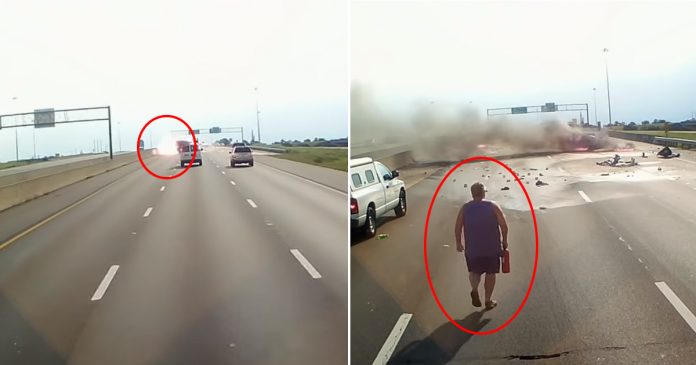 David Frederiksen didn’t think twice before saving two lives out of a car engulfed in fire. He was driving his truck on the 1-10 Freeway in Gulfport, Mississippi when he witnessed a car crash into an 18-wheeler.

The car crashed into the truck’s gas tank, causing a massive explosion that brought traffic to a halt. ABC News did a full coverage of the incident.

“You want me to go out there and see if I can get him out of the car?” asked Frederiksen to his co-driver Walter Letterman.

Walter was unsure if it was a good idea to go out there amidst the blazing inferno, but Frederiksen assured him that he had a fire extinguisher, and he should go help them.

He ran to the flaming car and spotted an elderly woman in the driver’s seat.

The 51-year-old grandmother was kicking the door, trying to set herself free. When Frederiksen, together with a few other drivers opened the door, they saw a little girl in the back seat.

“She was pretty happy when I grabbed her out of there,” recalled Frederiksen.

They were both rescued out of the car safely before the car went up in raging flames and thick black smoke. The 18-wheeler truck driver, Scott Swanson also survived without any serious injuries. The 1-year-old girl suffered minor injuries while the elderly woman had a broken leg.

Frederiksen further explained that he just wanted to put out the fire and make sure no one is dead. He knew he was putting his life at risk, walking towards the fire. However, his faith in God and people was bigger than the fear of losing his life.

“My actions were because of my love for God and love for people. Because it does make a difference.”

The whole rescue process was caught on Fredericksen’s dashcam and was uploaded to YouTube:

Deadly blizzard and heavy snow are set to strike US Midwest...