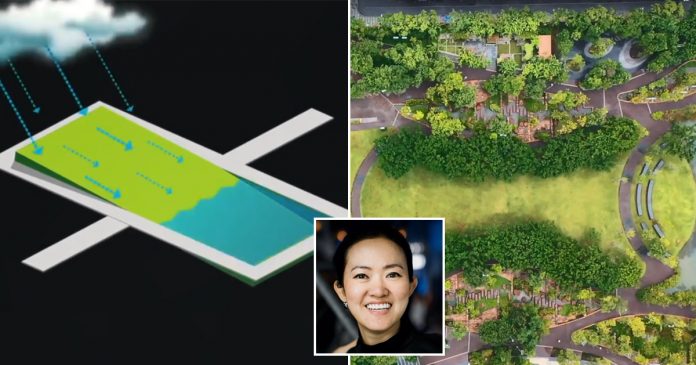 Flooding is one of the major natural disasters caused by climate change.

In low rise cities such as Bangkok, Thailand, floods are almost always inevitable when it rains for more than a few hours. The city, known as the Venice of the East was originally a smaller land situated near a river.

Over the years, urban development had caused the rise of a dense concrete jungle thus limiting the city landscape’s ability to absorb excessive water when it floods, ruining properties and everyday lives of the people living there. One woman decided to spark a change.

She built a park that is no ordinary. Unlike regular parks, the CU Cenetary Park is designed on a tilted-up land.

This way, the water is able to be collected in the pond located at one end of the park.

In the other end of the park is a large water tank that stores the rain, which is then used to water plant during the dry season.

Using Vorakhoom’s brilliant design, up to 1 million gallons of water can be saved!

In a video posted by Nas Daily on Facebook, Vorakhoom shares her aspirations for the idea. She wants people to be able to accept the fact that nature keeps changing and be prepared for a new challenge of climate change.

“I want people to learn how to live with nature,” she elaborates.

Vorakhoom studied landscape architecture at Chulalongkorn University as well as Harvard Graduate School of Design and is a fellow at TED. Her design has won her a 2019 WLA Award of Excellence, among others.

Though it is a very small start to a much bigger problem, Vorakhoom’s next plan is to build more parks in cities that experience excessive flooding around the world. Big changes always start with small ideas.

A Grandfather Refuses to Give His Grandson to Someone Else, 13...