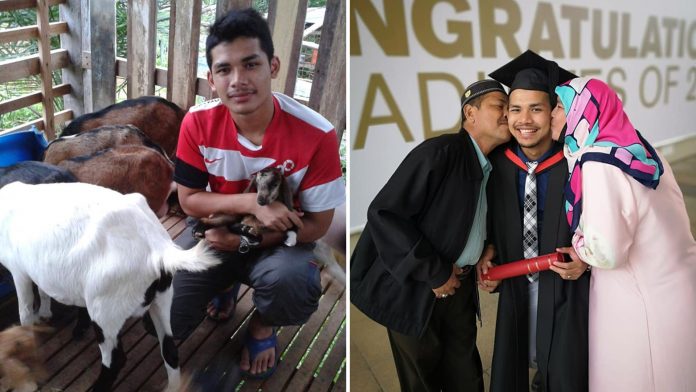 Becoming successful is the greatest payback children can give to parents and their sacrifices.

Here’s a story of how a humble boy who herded goats went to study abroad. Mohammad Afiq Ismail comes from a small village in Kelantan, Malaysia.

His father worked in a palm oil farm and herded goats. His mother took care of his disabled brother. Though they were living hand to mouth, Afiq’s father wanted to change their life for the better.

They toiled hard to send him to a private boarding school. However, he had to be transferred to another school when the exam results came out poor. There, he took the subject of Accounting and realized he had a interest for numbers.

When he received excellent results for his high school public examination, he was offered scholarship by the Public Service Department to study in the UK. Upon hearing the news, Afiq’s parent slaughtered a goat and a cow for their entire village as a token of gratitude.

Considering his parents did not speak English and none from his village has gone abroad to study, Afiq was more determined than ever to make his parents proud. He flew to the UK to study Accounting and Finance at the University of Essex.

During his three-year course, he worked part-time as a cleaner so that he could afford plane tickets for his parents to attend his graduation.

“My mother and father have never been on an airplane. I wanted to pay for their tickets as a gift for everything they’ve done for me, for helping me finish my studies,” explains Afiq in a Facebook post shared by his friend, Khairul Aiman Hamdan.

Afiq graduated with a First Class Honors for his course and was joined by his parents on his big day.

He further noted that he always wanted to give his parents the best, including the valuable experience of watching their son receive the degree.