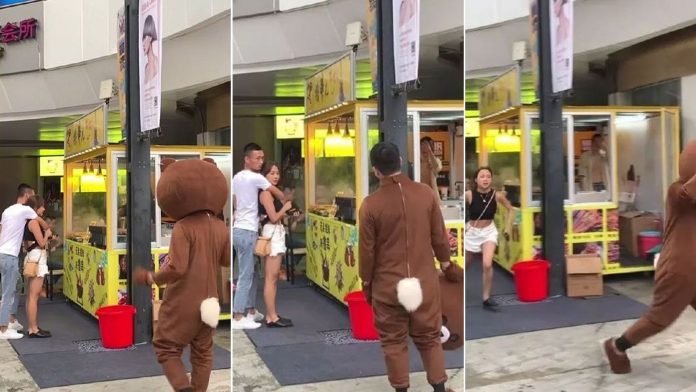 Having a partner who will go the distance for you is a wish come true for many girls.

However, it seems like some girls don’t appreciate what they have and seek the arms of another person instead. In a Twitter post shared by @T_Radiosonde that has since gone viral, the infidelity of a girl and the true love of her boyfriend is ironically both revealed at the same time.

The pictures show a man dressed in an adorable bear mascot, walking towards a couple who are standing in front of a food stall in what appears to be a street in China. The first impression many of us will have is that probably someone hired the mascot to surprise the couple, right?

Well…this is where things go terribly wrong. The guy in the bear mascot is actually the boyfriend of the girl, who was embraced in the arms of another man. He had traveled 1491 miles across to surprise her, but guess who got the shock of their life instead?

As soon as he saw the scene in front of him, he couldn’t gather a better reaction but to take the mask off his head.

All this while, his girlfriend was oblivious that he was standing there in front of her but soon enough she noticed.

The guy, without saying a word just walked away and the girlfriend ended up chasing after him and hugging him.

Netizens were fuming at this situation as they advised him to break up with his cheating girlfriend. Some even speculated that it might be staged to garner the public’s attention.

Though it is unclear what actually happened next, judging from the pictures, the guy in the bear mascot was definitely heartbroken. Netizens think he deserves someone better, so do we!