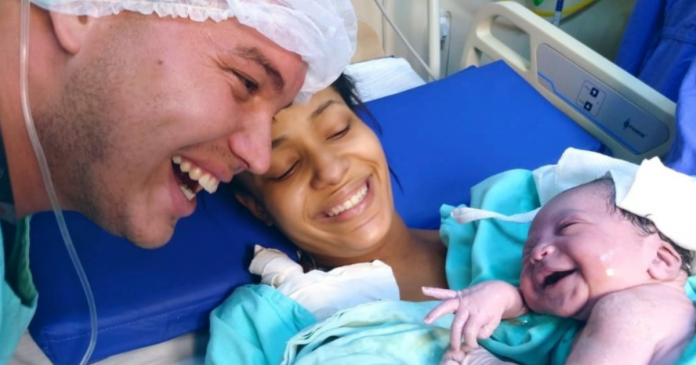 Flávio Dantas was really looking forward to the birth of his daughter, Antonella, that he spoke to his unborn baby girl every day. Little did he know that Antonella recognized his voice and responded with the most heartwarming smile the moment she was born.

According to Tarsila Batista, Flávio’s partner, the father-to-be never missed a single day without stroking her belly and speaking to their unborn baby girl.

“He always told her that he loved her so much,” Tarsila told Brazilian magazine SoNoticiaBoa. “‘Good morning’ when I went to work. He said ‘I’ll always be there,’ [and] kept stroking my belly.”

Tarsila noticed that how Antonella would move around when Flávio spoke to her.

“Amazingly it always seemed, at the same time every day, she started to move,” she said.

When Tarsila safely gave birth to baby Antonella on August 11 at Marcilio Dias Naval Hospital in Rio de Janeiro, Flávio was ready to say “Hello” to her for the first time.

Just like when Antonella was still in the womb, Flávio repeated his words to his newborn daughter but this time, the newborn responded with more than just kicks.

The moment the newborn heard her father’s voice, her face lit up. Her smile says it all

“They put her on top of me, sleeping, and as soon as he spoke to her, Antonella opened her eyes and smiled,” Tarsila recalled.

As for Flávio, he could not hold back his tears when he realised that his daughter actually recognized his voice

“I thought I knew what a feeling of true love was. Until I looked at that most sincere smile in the world,” Flávio said.

“It was [there] that I could be sure what love is,” the new father added.

“And it is that moment that people forget all the pain and focus on the most sincere smile of all. My princess was born on Father’s Day, ” Tarsila shared on her Facebook post along with a photo of the precious moment.

Apparently, Antonella’s reaction did not only surprise her parents but also everyone else in the labor room and thousands of others on the Internet.

The beautiful photo quickly circulated online as people around the world congratulated the couple for the birth of their daughter.

As for Flávio, it will surely be a day to remember throughout his fatherhood!

Cat persistently tapped his owner’s neck to tell her something. Later,...