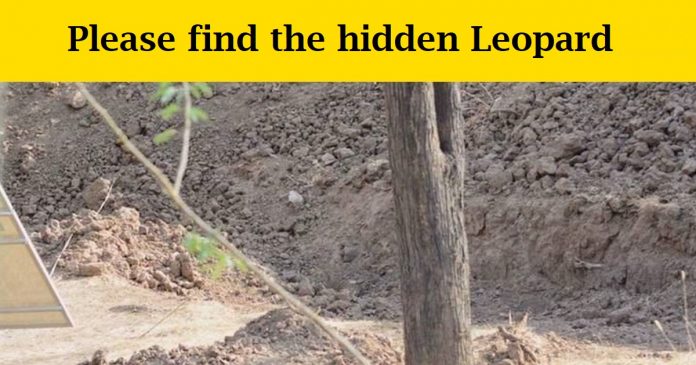 If you can spot the camouflaged predator lurking in plain sight in this photo, then you might have sharper eyesight than most people.

What seems like a no-brainer task turns out to be one of the hardest challenges online and it appears that the majority of people scratching their heads and squinting their eyes just to spot the “hidden” leopard!

In the latest challenge that has gone viral on the internet, the photograph was first posted by Twitter user @BellaLack, saying that her friend challenged her to find the leopard hiding in the background

Someone just sent this to me and asked me to find the leopard. I was convinced it was a joke… until I found the leopard. Can you spot it? pic.twitter.com/hm8ASroFAo

She first thought that it was a joke until she finally spotted the leopard lurking in the rocks and dirt.

Nevertheless, @BellaLack was not the only one who got convinced that there was no leopard in the photo at first as many social media users later commented that they, too, had a hard time to spot the big cat

Nonetheless, there is indeed a leopard in the photo and to make it easier for you to spot it, here is the spoiler

Even when the photo is zoomed in, the leopard may not be that easy to spot!

According to BBC, leopards usually use their astounding camouflage skills to creep just a few meters away from their unsuspecting prey before launching a lethal attack on them.

Thanks to their spots and rosettes, they can blend in perfectly with their surroundings, be it in the forest, mountains or somewhere rocky just like in the photo!

A cat watches a fight between a dog and another cat—what...