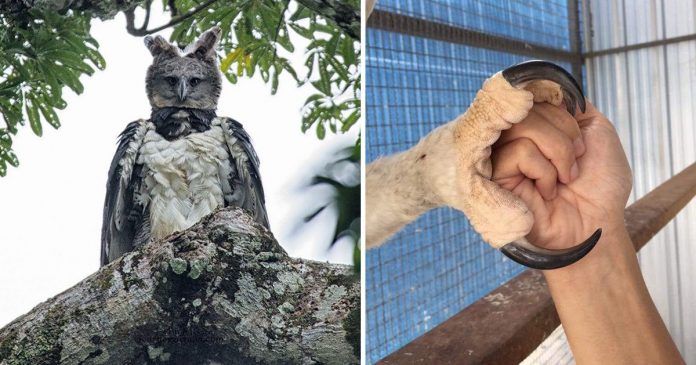 Meet one of the largest and most powerful eagles in the world, Harpy Eagle which has talons that are as large as a grizzly bear’s claws!

Thanks to their unique facial features that resemble a human face, Harpy Eagles were the inspiration behind the design of Fawkes the Phoenix in the Harry Potter series as well as the national bird of Panama.

While its smaller counterparts hunt fishes on the surface of waters and smaller animals like squirrels and rabbits, Harpy Eagles, however, have a large appetite and hunt bigger prey

The #HarpyEagle will stare at you, in the primeval forest, haunt your dreams, eat your soul

As they are blessed with stronger and bigger claws, toes and legs, Harpy Eagles often hunt tree-dwelling animals like sloths, monkeys, and opossums!

According to The Peregrine Fund, their wingspans are longer than many adult humans, reaching up to 6.5 feet long (2 meters)

However, unlike their equally majestic counterpart, the Andean Condor, Harpy Eagles are not usually seen soaring high in the sky. Instead, they prefer to fly low from tree to tree in the forest

Apart from their strong build, Harper Eagles are also agile hunters, thanks to their unbelievably sharp eyesight and incredible hearing

Not only they can fly between the tress easily when they are on a hunt, but Harper Eagles also able to see their prey in the thick rainforest even when there is little sunlight.

Despite being one of the most powerful raptors in the world, Harper Eagles often fall victim to humans, allowing people to approach them easily

This rather large bird of prey is the harpy eagle. Its eye-sight is eight times more powerful than that of human beings, and this bird is one of the most feared hunters in Brazilian forests. It is so powerful that it can snatch a sloth from top of a tree while flying, and it can carry an animal weighing 10 kilos. Although it is on top of the food chain and therefore has no predators – except for men –, and counts amongst the largest birds of prey in the world, the harpy eagle is an endangered species due to shrinking forests – it requires an area of about 100 km2 for its habitat. . . #forestfire #firefighter #climatechange #fire #amazonrainforest #deforestation #wildland #nature #climatecrisis #wildlife #savetheamazon #prayforamazonia #environment #pccant #fireservice #argentina?? #wildlandfirefighter #firefighters #tree #protecttheoceans #wildfire #wildlandfirefighting #amazonfire #rainforest #amazonia #peoplevsoil #a #breakfreefromplastic #saveourplanet #harpyeagle

Currently, this species of eagle is nearly endangered due to deforestation especially in tropical areas in the Latin American continent, WWF reported.

Even though the eagles are not as endangered as other animals like Amur Leopard, gorillas, orangutan, and sea turtles, it has become increasingly harder to see Harpy Eagles in their natural habitat.

This Blind and Starving Dog Waited for Death, but a Miracle...