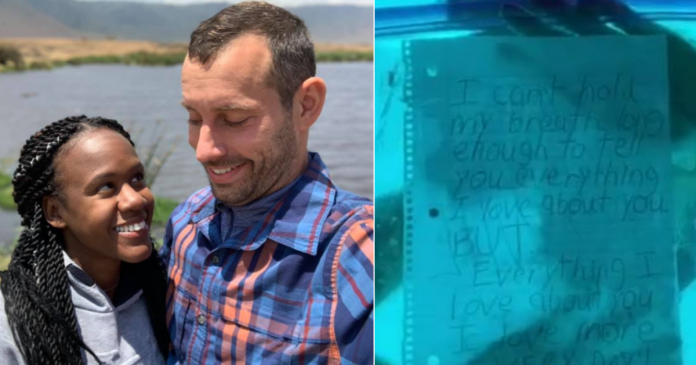 Steven Weber Jr. proposed to his girlfriend Kenesha Antoine in a romantic underwater proposal last September. Kenesha who was ecstatic at Steven popping the question said yes at his proposal but he never had the chance to hear her answer.

Unfortunately, Steven never made it to the surface after the romantic underwater proposal as he was found died just moments after proposing to Kenesha.

Steven and Kenesha were on a vacation on Pemba Island where the couple stayed at an overwater bungalow with a bedroom submerged in the sea, according to CNN

During the vacation, Steven popped the question by swimming underwater as he held a handwritten note against the bedroom window while Kenesha stood inside the bedroom

Steven later showed the ring to his girlfriend but he failed to emerge to the surface after the proposal.

In a tribute to Steven’s proposal, Kenesha later shared the romantic video and her response on Facebook

There are no words adequate enough to honor the beautiful soul that is Steven Weber, Jr. You were a bright light to…

“You never emerged from those depths, so you never got to hear my answer, ‘Yes! Yes! A million times, yes, I will marry you!!’ ” she wrote.

Despite Steven’s sudden passing, Kenesha tried to remain positive as she recalled their happy moments in her post

“I will try to take solace in the fact that we enjoyed the most amazing bucket list experiences these past few days, and that we both were so happy and absolutely giddy with excitement in our final moments together,” she wrote.

At the end of her eulogy, Kenesha vowed to marry only Steven in another lifetime

Steven’s cause of death remains unknown despite that the Tanzanian authorities had conducted an autopsy on Steven’s remains.

According to Steven’s sister, Mandy Hoffman, Kenesha tried to seek help from the resort personnel by phone and radio upon realizing Steven never emerged to the surface but was unable to.

Kenesha later flagged a passing boat and managed to find Steven later on. The boat owner tried to resuscitate him back to life but it was already too late.

Following Steven’s mysterious death, Mandy said something must have happened to Steven before he could swim to the surface as his brother was a strong swimmer.

“This is all we keep talking about. Something other happened besides him running out of breath,” Mandy told The Guardian.

However, the resort has yet to respond to AP’s emailed inquiries regarding the cause of Steven’s death.

Her husband took everything and left, leaving only a piece of...