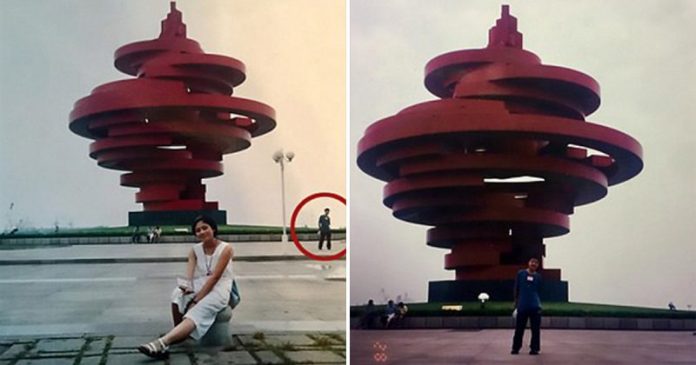 Love always finds its way. That is especially true for a couple from Chengdu, Sichuan Province, China who found out they had crossed paths 19 years ago thanks to an old photograph in their family album!

Ye and his wife, Xue met and fell in love in 2011 in Chengdu. The two later were blessed with a pair of twin daughters but it was only in 2018 that the couple found out that they have met each other way before they got married.

According to Sina News, apparently, the couple visited the May Fourth Square in the seaside city of Qingdao at the same exact moment.

At the time, Ye and Xue were still teenagers and did not know each other when they visited the park in July 2000.

Ye visited the park with a tour group while Xue was with her mother at the time. When Xue decided to take a photo with May Four Square as the background, Ye was accidentally caught in the background posing for a photo as well!

“I was looking at the picture where my wife was sitting in front of the May Four Square, there’s also a man standing at far back. My reaction was: ‘Oh wait, that was me!’” Ye told Chengdu Business Daily, as translated by Daily Mail.

Ye then shared his story on social media platform and it soon went viral with many of their friends saying that Ye and Xue were meant for each other.

In the meantime, Ye plans to keep both photos and treasure them for the rest of his life.

According to Ye, he had a plan to bring his family back to May Four Square in the future.

“It seems that Qingdao is certainly one of the most special cities (for us). When the children are older, we will go to Qingdao again and the family will take a photo again.”